We stayed for almost a week at the Legend Metropole (Sofitel) – a historic, luxury hotel that opened in 1901 in French Colonial Style (photo below),  The prices were quite reasonable back in 2008 – probably a lot higher now as Vietnam becomes more popular with overseas travellers.

The day to Halong Bay was a long one as it takes approximately 3.5 hours via shuttle bus from city hotels.  Once in Halong Bay we went on a 3 hour cruise of the bay in traditional boat with another few couples.  It was a pleasant cruise with a simple, casual lunch (see photo) followed by time to swim for a short while.  The water was very deep/dark where they stopped so we didn’t spend much time in the water – just a quick dip to cool off…it was hot day.  The highlight was the spectacular views as can be seen in the photographs which I’ll post later tonight.

We would like to return to Hanoi and Halong Bay but next time we’ll look into staying a night or two in Halong Bay – we hear there are many good hotels there now and some beautiful food on offer too…we love Vietnamese food when it is cooked well with beautiful fresh ingredients.  I’ll note our fave recipes at the end of this post.

Dinner is on now…Vietnamese by my personal chef…Tony!  I’ll be back soon 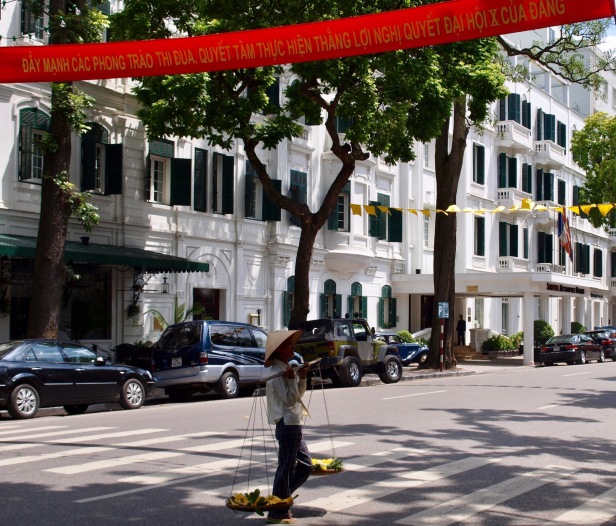 Halong Bay – day trip by car followed by 3 hour lunch cruise around the bay (photo below):

The colours during the day changed from blue/greys to deep greens depending on the vegetation of the area or the changing light throughout the day…it was mostly cloudy but quite hot in the middle of the day.  A pleasant breeze came up on our cruise back to the port. 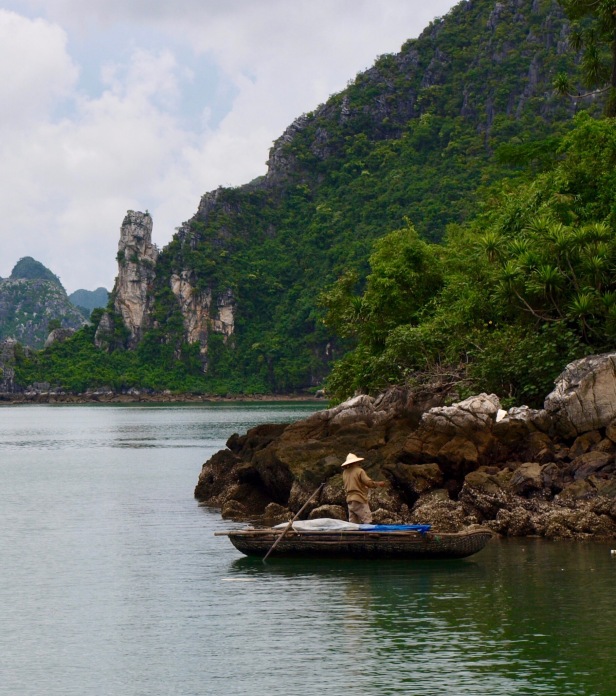 After a quick swim (Tony just reminded me that we saw the occasional jelly fish too so we just cooled down quickly!) we were served lunch – nothing memorable but fresh and tasty. 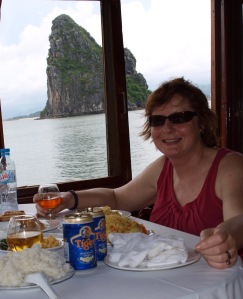 Photo above:  View of Hanoi’s picturesque inner city lake;  taken from a restaurant – known more for it’s views than its food…I’ll note the restaurant name once we refer to our journal – in archive – our garage!  However, even in 2008 we did find some beautiful restaurants and some French/Vietnamese.

Photos below:  On the streets of Hanoi…on the right you can see the man in the background has a concerned expression.  Shortly after Tony took this photo, the man came up to us and said “overcharged!”.  I gather the women on the left we borrowed “the props” from was his wife’s rival and in his opinion $1 was too much.  She had a young child to feed so even if she did overcharge, we didn’t mind!

We have a variety of herbs in a garden at our home but according to the woman who sold me Vietnamese mint (right hand corner of photo below), it needs frost protection at night so I keep it on the patio table/under cover.  It’s only 30 April but some mornings have been foggy so that indicates that the first winter frosts might be around the corner here in Canberra.  From our frequent travels to Asia over the last 35 years, I’ve collected sleeping Buddhas (as well as other Asian artefacts) – I’m not Buddhist but they look so calm & peaceful so that appeals to me!  Back to Vietnamese Mint – we just love it’s fragrance/taste…perfect during summer in rice paper rolls.  When teaching, we would sometimes have an Asia focus during the middle primary years and making these rice paper rolls was one of the most popular (& tasty!) activities!  I’ll post a simple recipe for them over the next few days. 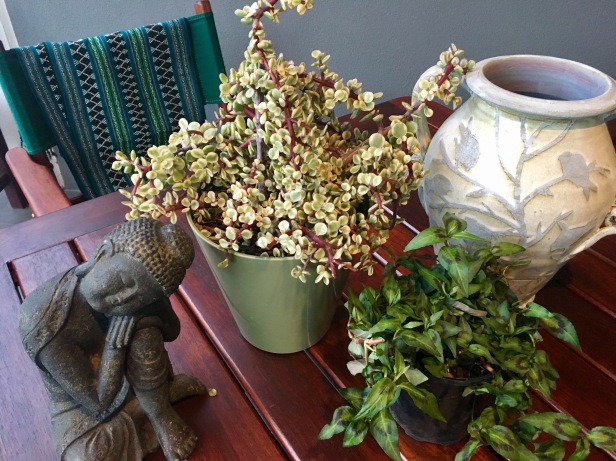 One of our favourite cook books is Indochine by Luke Nguyen...it’s actually more than a cookbook – it starts by writing a story about Madame Van at the Metropole:

“As I enter the legendary Sofitel Metropole, I feel as though I have slipped back in time.  Built at the turn of the nineteenth century, this French colonial hotel oozes the nostalgic flair and charm of a bygone era, with its wood panelling, French doors, beautifully crafted furniture and low ceiling fans. As captivated as I am by the lobby, I naturally gravitate towards the restaurant…Le Beaulieu Restaurant is renowned for French inspired Vietnamese dishes…Madam Van (the chef there for last 20+ years)…”knows everything about French-Vietnamese cuisine”.

One of our favourite recipes from Indochine:

Note:  Perilla is in the mint family…I can sometimes get it from an Asian grocer but if I can’t, I substitute ordinary mint in this recipe ie 10 small mint leaves.

Thinly slice the kingfish and transfer it straight onto a serving platter, arranging the pieces so they overlap slightly.  Juice 2 Passionfruit, then strain the juice, discard the seeds.  Add the dipping fish sauce to the strained juice, stir to combine, then drizzle the dressing over the kingfish.  Juice the remaining Passionfruit (including seeds) onto the Kingfish, then sprinkle the herbs and lemongrass over the top.  Garnish with the chilli and serve immediately.  Serves 4-6 people as part of a shared meal.

A note from Luke about Passionfruit…

“Passionfruit is used in both French and Vietnamese cuisines…I love it for it’s sweet yet sour characters.  When you visit Vietnam, make sure you try a freshly squeezed Passionfruit juice” Luke Nguyen.  We tried Passionfruit juice in Vietnam – it’s a little different to Australia but equally delicious!

AFTER HANOI…we toured through Vietnam over another 3 weeks – mostly private drivers/guides (all with good English) with our last stop in Ho Chi Minh City (formerly Saigon).  It was quite an inexpensive form of travel in 2008.  We plan on returning again in the next few years so it will be interesting to see how things have changed over a decade.  In the near future I’ll post the highlights/photos of those few weeks in 2008.