We highly recommend this journey – see last post + check out a map of course (I’ll get around to posting one soon that older children might find interesting too). This enjoyable way to travel between countries was recommended by a fellow Greek/British traveller on another of our European trips a year or so before. So glad we followed his tips as it was a fabulous experience and the ease of entering Turkey was unbelievable! This was highlighted when I read Tony’s “Travels in Turkey” journal today:

“I was a bit nervous as had never booked direct via internet with a Turkish ferry company. We lined up (not too crowded) and all went very smoothly. As the Rome2Rio App (which we love!) had indicated, it only took about 45 minutes! The view was also interesting – both departing Samos and arriving Kusadasi. We docked at 6.30 pm; immigration, customs, short walk to hotel!”… (see last post/photo)…”checked into hotel; offered a cool drink; freshened up; walked to seafood market restaurant (see photo in last post); drinks in front of us at 7.45 pm…so all done in 1 hour 15 min – Wow!”

So such a great tip from the lovely Greek/British man as love it when we can avoid airports if possible! The ferry trip was also very professionally run with safety precautions etc. seen on most modern forms of transport.

We found the hotel ourselves (Efe Boutique Hotel – Kusadasi, Turkey)…just with Net research including Trip Advisor etc. – we mostly check out the photos; room tips; location…sometimes whether there’s help with bags if many stairs/no lift as we’re not getting any younger!

Our dinner at the local seafood market (see last post photo) was also delicious and such a uniquely Turkish setting – without many tourists considering there was a cruise ship in port. Our accidental timing was ideal as it seemed many cruise passengers had returned to the ship for dinner. This is a “habit of cruise passengers” that frustrated the local restaurants they said…similar to what’s happening in Barcelona & other big port cities but here it’s on a much smaller scale of course so in general it was never a problem in Turkey.

Talking of dinner, here’s a cookbook I recently purchased from a Kingston (Canberra) bookshop…just $6! Later I’ll post some recipes from it plus another book I borrowed today from our Ulladulla (South Coast) library: 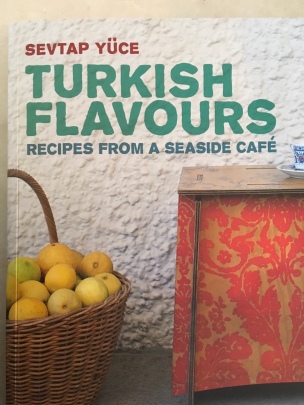 Another enjoyable dinner was at a local, traditional Turkish restaurant – “Oz Urfa“…a cheap and cheerful little place. The waiters could speak enough English to enable them to translate the menu. They were warm and welcoming, the food was tasty and we had a relaxing evening.

Overview of our month in Turkey:

Many ancient sites; a traditional Turkish village; the popular holiday island of Bozcaada; Canakkale (base from which to visit Gallipoli…a significant site for Australians) and then onto Istanbul for a longer stay before we departed for home (via Hong Kong).

Back to our first full day in Turkey…

It was quite a long day but even with my back problems (which tire me out sometimes) it was all very enjoyable. The great thing about it being a private tour was that our guide was able to match the pace/information to what we requested. He was excellent!…organised in Australia with a small group tour company (an Australian/Turkish couple) we found via Trip Advisor.

Our first stop was to “The Virgin Mary’s House” – we weren’t allowed photos inside but the morning tea in the gardens outside was pleasant…Photo below.

We also visited a carpet making workshop…of course, the hard sell came afterwards and it took a while even though we didn’t ask any questions nor indicate we were the least bit interested in buying. Some of them were beautiful but still very expensive + we didn’t need/want one! If you’re interested in buying one (leather goods/sales also a big sell in Turkey), of course it would be worth doing in depth homework before travelling there – we’ve heard stories of people getting ripped off. Leather goods/clothes are a lot easier to assess + at least you can be sure it’s leather + you can take it home with you; relying on carpets arriving home/getting what you paid for etc. is risky. I bought a beautiful leather jacket when in Sans Sebastian (Spain) a year or so later (see post if interested) – I think it was better quality/value than what was on offer at a leather showroom we went too…that one was unbelievably pushy with Russian models on the catwalk just for us! Super hard sell! We should have said NO right from the beginning as it wasted an hour of our day. It was quite an annoying experience so we asked every tour guide after that not to take us to shops; workshops; sales rooms etc. It was really our only complaint about this tour company so in the scheme of things it wasn’t so bad…quite funny really, particularly the fashion parade! 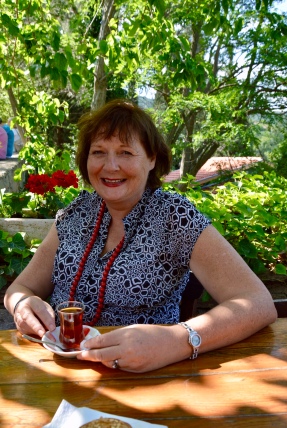 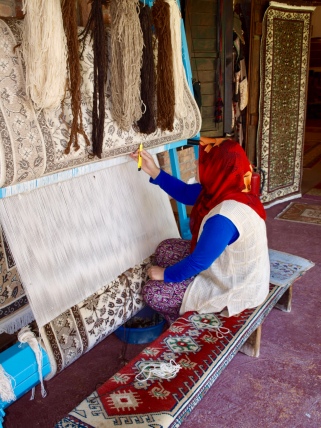 Ephesus was built in the 10th century BC by Greek Colonists. During the Classical Greek era it was “one of the twelve cities of the Ionian League”…”the city flourished after it came under the control of the Roman Republic in 129 BC.” Wikipedia 2018….and more if interested…

“The city was famed for the nearby Temple of Artemis (completed around 550 BC), one of the Seven Wonders of the Ancient World.[6] Among many other monumental buildings are the Library of Celsus, and a theatre capable of holding 25,000 spectators.[7]

Ephesus was one of the seven churches of Asia that are cited in the Book of Revelation.[8] The Gospel of John may have been written here.[9] The city was the site of several 5th century Christian Councils (see Council of Ephesus).

The city was destroyed by the Goths in 263, and although rebuilt, the city’s importance as a commercial centre declined as the harbour was slowly silted up by the Küçükmenderes River. It was partially destroyed by an earthquake in 614 AD.

The ruins of Ephesus are a favourite international and local tourist attraction, partly owing to their easy access from Adnan Menderes Airport or from the cruise ship port of Kuşadası, some 30 km to the South.” (Wikipedia 2018) 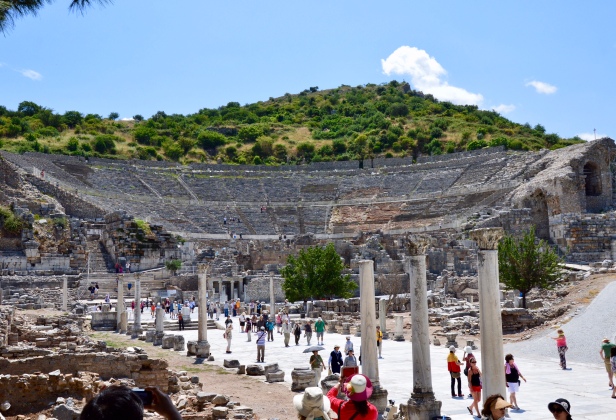 Our Meat Free Monday Meal (photo below)…not always on a Monday but we’re often happy to skip meat a few times per week – not just for health reasons as we really enjoy many vegetarians meals if consideration is given to a good combination of textures, flavours etc. Do feel for strict vegetarians as the add on menus at some restaurants here are very ordinary so some friends of ours don’t bother dining out very often. However, if you love your red meat Australia is the place to visit!

Photo: not as professional as picture in the book but the combination of flavours was delicious and we’ll definitely repeat this meal…Beetroot salad as noted above/below; Zucchini fritters (I’ll type up recipe below soon but Corn Fritters would work too – recipe below); Red Beans in Homemade Tomato Sauce; Turkish bread…lightly browned in 1 whole piece.

As can be seen from this photo, the fritters aren’t photogenic so don’t expect a pretty plate but the tastes and textures work v well + for a sense of occasion & romance do remember the candle – cheers!🍷…good news is that wine was available throughout Turkey except in 1 restaurant we went to in Istanbul – wasn’t advertised so Tony wasn’t impressed! Can’t remember at this point if the wine was imported (think it came from Greece) but we do remember tasting Turkish wine at a very modern little B&B along the way on Island of Bozcaada. We loved the place!…a post for another day!

(* we sometimes buy Dukkah from an Oxfam store in Canberra City as 2 large jars for quite a good price/quality but you can make your own of course…many simple recipes on Net. 1 we like is at end of this post.)

If Pomegranate Molasses is unavailable (we can’t find it at Coast/in Canberra, try Mawson “delis” ) we reduce Balsamic Vinegar or buy the type already concentrated…if you prefer to reduce sugary content, regular Balsamic works ok too.

Preheat the oven to 160 deg C. Wrap beetroots in foil and back for 20 min, then add the pumpkin and cook for another 20 min, or until the beetroot is soft and the pumpkin is golden. Set aside to cool. Peel and chop the cooled beetroots.

To make the dressing, whisk the pomegranate molasses with the olive oil until combined.

Put the rocket in a serving bowl and top with the beetroot, pumpkin, onion and tomato. Drizzle with the dressing, then crumble the feta over the salad. Sprinkle with the dukkah to serve.

Note on beetroot & eggplant: to save time on busy days we often have some pre-packed beetroot in fridge altho freshly cooked beets (often cooked with a little balsamic) has that beautiful texture/crunch!…worth the extra time if time permits😉. We sometimes pop a whole eggplant (aubergine) into the oven at the same time (wrap in foil) especially when our son & daughter in law grow excess in their garden.

Combine nuts/seeds with S&P. Store in airtight container for up to a month.

Cut the kernels off the corn cob and place in a bowl. Add the onion, polenta, parsley, eggs and baking powder and season with sea salt and black pepper. Stir for a few minutes, until the batter is well combined.

Heat oil in a frying pan over high heat. Drop 2 tablespoons of the batter at a time into the hot oil and cook for 3-4 minutes on each side, or until golden. Drain on paper towels. Serve hot or cold.