Lonely Planet’s “Best in Travel – 2018” (we collect their small books) not only notes the above but also suggests we don’t “forget the vibrant culture” of cosmopolitan Cape Town…”this year the country’s many attractions will be bolstered by ‘Nelson Mandela Centenary 2018: Be the Legacy’, an official programme of events – some sporting, some educational, others devoted to the arts – aimed at honouring the legendary leader.”

A magical day to remember at Table Mountain Cape Town last year.  After Table Mountain in the morning, we then drove a few kilometres to the National Botanic Gardens (photos of those gardens in next post). If you don’t have a car the taxis are inexpensive and the restaurants/hotels know the reliable Co to use. It is possible to walk from Table Mt down to near Botanic Gardens?…might explore that option next time when my spinal fusion is good and stable! Will also check what that track is like of course as some are quite rocky I heard?

Wonderful views from cable car. If you look closely on the ground on RHS you can see people walking up – I think it takes a few hours?

Wonderful views from cable car. If you look closely on the ground on RHS you can see people walking up – I think it takes a few hours?

We stayed in Cape Town for a week in June/winter last year – more on where we stayed in next post – loved the B&B/Guesthouse. The weather felt similar to Sydney in winter – cool (occasionally cold) days but there’s no need for an overcoat etc. when walking around at night. It’s quite safe to walk around the Waterfront area at night – lots of people/cafes/restaurants but there are some other parts of Cape Town (many big cities of course) where it’s advisable to take a taxi instead.

Our first 5 days were all very misty/cool in the morning and heavy fog hovered around Table Mountain so we could hardly see it. Fortunately, on the 6th day the fog lifted very early so we took the opportunity to drive up in our hire car and then take the cable car right up to the top. It is possible to hike up to the top as you can see people doing in the photos…I might do that in another visit but at the time my back was bothering me a lot, especially in the early morning, so we took the easier option.

There’s plenty of parking most days and even the view from our parking spot was beautiful (photo above). If driving, read up on Net about the “parking minder” custom in South Africa…a friend of mine told me about it and glad she did or we would have been a bit confused about this – all v simple and safe once you know!

A note about parking customs:

The parking “minders” look after your car and you pay them a small amount on your return – that, and the “temporary” housing on the fringes of towns/cities in South Africa, does make the economic/racial divide that still exists very obvious. My South African friends tell me that the racial divide is certainly not as great as it was even just a decade ago but the economic divide, like in many places around the world, seems to be increasing. All very sad and our hope is that by visiting these countries and becoming involved and interested in different cultures in a respectful way, things might improve in the longer term. Perhaps a naive view but if we all reflect on our behaviours and attitudes (at home/abroad) + learn so much from travelling, seems like a hopeful way to go.

Following info from Africageographic.com …a good site if interested in knowing more. If showing children perhaps ask them questions relating to what they might notice from images and then focus on key words. I’ve put some key words in bold text in 1st paragraph below. It’s good for children to learn how to identify key words at a young age so giving them a go, at either using a highlight pen with a printed text, or using the BOLD function themselves (if they’re old enough for that) might be a quick/engaging activity sometimes?

The smallest of our list, the orange-breasted sunbird weighs just a few grams. These birds are fynbos endemic (found nowhere else in the world) and, although found all over Table Mountain, they are one of the big attractions at Kirstenbosch Botanical Gardens because they are too busy fighting over nectar flowers to care about nearby camera lenses.

Fast fact: Sunbird tongues are covered in bristles and are tube shaped to help them drink nectar.

Where to see them: The quickest route to the sunbirds is to enter Kirstenbosch Botanical Gardens through Gate 2 and walk past the koppie to the erica garden which is the main source of nectar for the birds. Look out for southern double-collared and malachite sunbirds which also vie for erica nectar.”

Above and below are both our photos…images of Dassies (Rock Hyrax) are from the Net.

We didn’t see any dassies but the sign sparked my interest in knowing more about them which I’ll also note below. 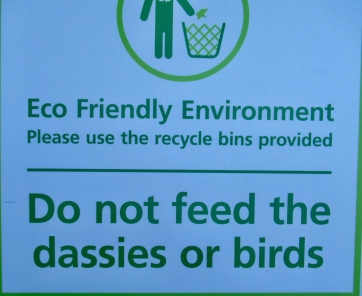 Info below from Wikipedia:

“The rock hyrax (Procavia capensis), also called rock badger, rock rabbit, and Cape hyrax, is commonly referred to in South African English as the dassie…Like all hyraxes, it is a medium-sized (~4 kg) mammal, with short ears and tail.”

“The closest living relatives to hyraxes are the modern-day elephants and sirenians. The rock hyrax is found across Africa and the Middle East in habitats with rock crevices into which it escapes from predators… Hyraxes typically live in groups of 10–80 animals, and forage as a group. They have been reported to use sentries: one or more animals take up position on a vantage point and issue alarm calls on the approach of predators.

The rock hyrax has incomplete thermoregulation and is most active in the morning and evening, although its activity pattern varies substantially with season and climate. Over most of its range, the rock hyrax is not endangered, and in some areas is considered a minor pest.” Wikipedia 2018

Dassies and having lunch at Table Mountain

We heard that dassies are usually shy but the ones more familiar with tourists eg. At Table Mountain aren’t so much and can have a tendency to steal your lunch so beware! Not a bad idea to take a picnic lunch to the top if it’s a nice day as the cafe, while pleasant, is typically more costly than other places.

Be similarly cautious, or even more so, around Baboons (I’ll post photos in another post) as they love to steal food from people plus can seem quite aggressive at times although we kept a safe distance. I do have a funny story about baboons (from Inyati Lodge…see past posts) that I’ll also write about in a future blog post.

I’ll also post more about Flamingos (photo below) in the future as they can be seen in and around Cape Town – this photo taken in Hermanus, about 1.5 hour drive from Cape Town. However, if you want to see them in Cape Town, we heard that there are places not far from the city – small nature reserves so that would be worth investigating if time is tight and you’re mainly in Cape Town.

Back to scenes of Table Mountain: 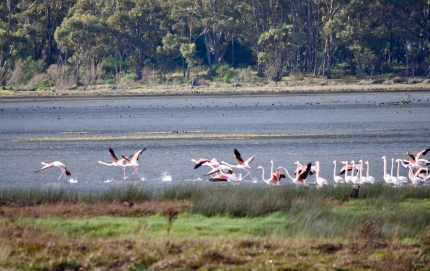 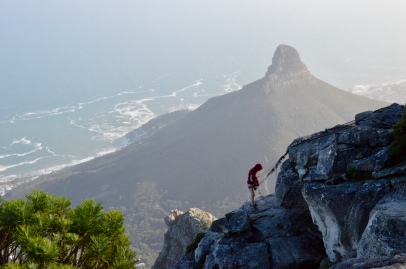 Abseiling at Table Mountain – we watched as he set up

After the morning at Table Mountain including morning tea at the cafe, we returned again by Cable Car. It is possible to walk up and/or back although I hear it takes a few hours and the track is rough in parts and for safety reasons, best to go with a small group as “parts can get quite isolated”?…what I read on Trip Advisor by locals.

In the early afternoon we did lots of walking around the National Botanic Gardens…one of the most beautiful gardens in the world. We had a light lunch at the Gardens’ Restaurant (also gorgeous) followed by dinner at the restaurant seen in photo below – a wonderful day! We slept well that night!…will write more about where we stayed + photos of the Botanic Gardens in a blog post next week.

Lots of other African recipes at bbc good food to try as well.