“The best laid plans of mice and men oft go astray”...I hadn’t thought about this saying (a common one I heard during childhood) until writing this today.

Fortunately, this trip, while well planned as usual (thanks mostly to Tony!) hasn’t gone astray much at all. Just a few wrong turns in Oslo when Goggle maps on Ph let us down- but as usual even taking a slightly longer route took us past some interesting sights we may have missed.

I’m writing on a 5 hour train trip in Norway – Oslo to Flam today. We’re basically doing the “Norway in a Nutshell” route which you can book through an agent; however, Tony made our own bookings and saved us a few hundred dollars he tells me.

As usual, I made final decisions on the hotels and so far so good!…we’ve loved our stays in Singapore (photo below), Stockholm (next postcard) and our last stop in Oslo. I tell Tony we make a good team!

For reasons I mentioned above, I really don’t know why I get nervous the week before we leave home (wish I could be more like Tony & sleep well 99% of time!) as all our travels generally go so well and on the odd occasional, when things didn’t go as expected, the initial stress often made for an amusing tale down the track!

The only time when it wasn’t funny at all was when Tony became very ill on our arrival in Santa Monica (LA, USA) but fortunately we had a few days in same hotel (near a wonderful fresh food/craft market) so he was able to rest up while I explored + brought back homemade produce (even chicken soup), berries etc. as he started to feel like food again. I’ll look for a photo to pop in here even if off the track a bit as usual…reminds me to do a post on our trip from LA – Alaska in 2012…

Back to Singapore stopover…we stayed for a few days as it was great to rest/swim/eat + stroll around the city (too warm for brisk walking like in Norway!) as it had been quite cold in Canberra before we left. I’ll do a longer post on Singapore once we get home as we just loved the district where we stayed…much better than our previous stop overs.

With a number of Universities and Art Colleges in the area (young people everywhere) there are many art galleries and museums (both large & small) + cafes and restaurants for varying budget (although Singapore is generally an expensive city). If you’re on a tight budget (like we were in our early years together) there are more affordable stopovers like Bangkok (a post for another day).

However, we do love a Singapore stop-over as there’s now a direct flight in/out of our home town – Canberra + our apartment is only 10 min from the airport…a big saving in both time and money for us as before the international connection started in Spring (Sept?) 2016, we would have a 1 night stay at Sydney airport before any overseas travel. Some people do fly (or take bus) straight through to Canberra (just a 30 min flight) but we find it more relaxing (now retired!) to start our trips feeling rested.

When working, Tony would often travel straight through and then head off to work next morning, feeling v jet-lagged, to put in a long day either at the office or Parliament House; he remembers one day going to Senate Estimates and being so exhausted that during the lunch & dinner breaks, catching up with sleep in the car rather than eating. Sometimes the pace of work was exhausting – something that’s not often acknowledged by general public when they talk about public servants (and teachers in regard to my career)…

Time to get off my soap box!…and back to Singapore stay. Here’s one of my favourite photos…a moment Tony captured so well. 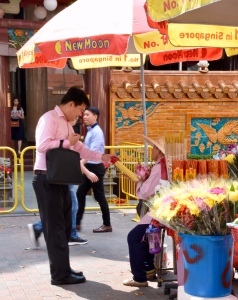 Just finished our late lunch in Flam…it was such a beautiful rail trip from Oslo to Flam. The wi-fi is working well here so what I intended to be a short postcard ended up being a longer post with memories from 2012 thrown in! I suppose stunning fiords are on my mind once again! We just have 1 night here in Flam (just as well as it’s super expensive considering the size etc. of the room) and we travel onto Bergen tomorrow – we’ve heard that Bergen is a “global treasure” so we’ll keep you posted 🇳🇴