Arrival by Train from Bordeaux:
Legs of trip:  SNCF (French train) to Hendaye (near the border);  Hendaye (local train) to Sans Sebastian (Donostia)…details below. 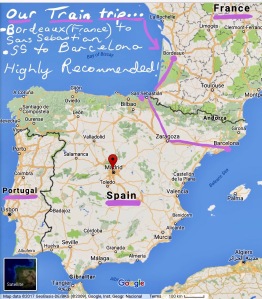 We loved the train journey from Bordeaux to Sans Sebastian.  It was only a couple of hours until we needed to change trains at the French/Spanish border.  The change of trains is really easy…as you come out of the main station (Hendaye), look to your right for the regional train service.  It’s only about 100 m and you can buy tickets at the office – they were only €2.50 each for a 30 min train trip to Sans Sebastian (Donostia).  Sans Sebastian is a small city;  we stayed at a small hotel near the centre so on arrival at SS/Donostia we asked at the ticket office (he spoke English…many do in SS) for directions to the taxi rank.  He kindly called a taxi for us and we were at our hotel within 5 min!  A great day and so much to see along the way!…French seaside areas, suburban and country living/architecture etc gradually changing to the Spanish/Basque way of life.  A highly recommended trip!  Try to time your visit so that you’re in Sans Sebastian on a weekend, it does get extremely busy then (especially in the warmer months we expect) but there’s so much happening – see photos below.

Feature photo:  a cooler day in Sans Sebastian so we decided on a more formal lunch (was 1 of our favourite restaurants here) and then had a very small meal in the late evening at a casual Pintxo bar (like a Tapas bar).

When you first arrive in Sans Sebastian you won’t miss the famous Promenade and La Concha Beach as it’s only a few minutes walk from the centre of this small city.  La Concha Promenade borders the famous Concha Bay, “shell-shaped as indicated by its name in Spanish, with 2 beaches (Ondarreta and the Concha) and an island, Santa Clara.”  (SS Tourism)

Try to make time for a long stroll along the promenade but be aware that if warm weather is predicted that it’s best to go early morning or late evening as there’s not much shade…there is a shady area under the promenade as can be seen in the next photo:

The above photo was taken on a week day morning in October.  Most people were walking on the Promenade above.  I imagine it would be a popular space for young families to sit in the heat of summer – wish we had more of these shady areas (&/or more trees) along Australian beaches!  However, there wasn’t much shade as you walk along the promenade above (see next photo):

In October it started out pleasantly cool in the early morning but by mid morning it was quite hot with reflection from the concrete path.  It’s a good idea to wear a hat (I know, mine is missing in this pic!) + take some water as there’s not much shade along the way.  There are not many kiosks or cafes near the beach + what is there is $$$ if you can even get a seat – we tried & failed!   Cafes there might be quieter mid week?…we didn’t try again as we wanted to explore around the Old Town area & other parts of the region.  As you can see from the photos, there are people of all ages and walks of life strolling up and down and even quite a few enjoying the water on a very warm autumn day.  We put our toes in the water – it was chilly…some might say refreshing!  There is also a cycle path next to the promenade.

We found the use of the beach for Saturday sport (football & paddle board races) was fascinating and really fun to watch as can be seen below.  Very different to our children’s football (we call it Soccer in Australia) on wintry playing fields! 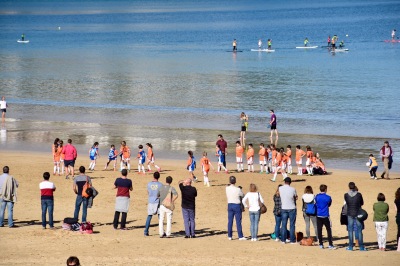 More Saturday sport in October – started off cooler and got to mid/high 20s (60sF).  There was an indoor/outdoor cafe in this pavilion but no seating available on a Saturday morning in October.  Could be a nice place to make a booking for brunch (such a lovely view) – we might find out about that if we return to SS – we hope to!

Added to the gorgeous views of the sea and people participating in a range of activities, is the unique Basque Architecture on the other side of the promenade.  If you love checking out the local Architecture look for these iconic buildings – Hotel Londres, the Palacio Miramar and Perla Spa.   There were so many things to do during our week long stay that we ran out of time to go inside some of these buildings…we presume some have a bar that we might explore on our next visit!

Many people sail or kayak out to this island.  Tony loves to kayak on the Australian Sth/East coast but prefers to be accompanied by our sons – I encouraged him to look into hiring one and go by himself (I’ve had spinal surgery & find it too hard on my bad back) but he decided not to.  Maybe next time!

Photo below:  An easy walk from the centre of SS…loved seeing surfers cross this bridge – built in 1921.  The bridge has fantastic lamp posts in Art Deco style “designed by Victor Arana” (SS Tourism).  There are many beautiful historic buildings up/down the river (more photos below) as well as some modern Architecture including the Kursaal Congress Centre (also known as the Kursaal cubes) (SS Tourism).  We also love the view toward the mountains in this photo.

Photo below:  Sunday stroll near the La Concha Promenade again…this time the action was on the streets rather than on the beaches!  Note the Basque Architecture and the hilly surrounds – such a picturesque and vibrant city.  We love the Art Deco lamp posts all around Sans Sebastian too.

Close to the centre of the city – once we learn more Spanish we might return to this theatre as part of the audience.  It was interesting to have a quick look inside!

Photo below:  San Telmo Museo – mostly a History museum but there was some Art as well.  There was an English audio but many of the larger/detailed information boards were in Basque with smaller English information cards (in wall pockets) – so for that reason (& a few others) it wasn’t so easy to navigate compared to similar European museums.  The combination of historic & modern Architecture was very interesting plus how they used the front courtyard eg. Learning activities and experiences for children and youth.  It was interesting to observe from the cafe across from the museum – I went there for lunch before my afternoon visit to the museum (a lovely cafe – recommended if you brush up on Spanish as not much English at all).  Tony decided to do something else – a more energetic walk around the hills of the city.

So many wonderful sights, sounds and tastes in Sans Sebastian…will post more about the food scene in my next post – definitely this week + a post “Sans Sebastian, Spain for Kids” in coming weeks.

For more information go to http://www.sanssebastianturismo.com or http://www.basquecountry-tourism.com + review sites like Trip Advisor although, of course, proceed with critical analysis on those review sites.   There is a declaration that needs to be made on Trip Advisor stating that the reviewer has actually visited the place + they’re not a family friend of the cafe, museum etc.  Also, have you sometimes wondered, like us, if some people have actually gone in the door before they wrote their review &/or they’re so negative & searching to find fault that it may have been best to stay home completely!  (It’s great that the cafe/restaurant/hotel can make the final comment.)  However, with a lot of skim reading etc., it’s clear that there are so many people out there reviewing with a sense of generosity combined with helpful honesty so we have found TA and a range of other Travel Guides including Lonely Planet, Food Guides etc. so useful.  In the future I’ll list some of those resources on a  “books & resources” page.

With a bit of digging we have found some “hidden gems” as we call them on Trip Advisor.  Places that aren’t always ranked No. 1 (particularly if there are many restaurants or hotels being reviewed in 1 destination). For example, we’ve found some excellent B&Bs (often not listed with the hotels) + the smaller/newer places sometimes have fewer reviews & for that reason are given a much lower overall comparative ranking BUT, in some cases, all their reviews are “excellent” (a 5 rating).  Having say 10+ recent “excellent” reviews (depending on the reviews of course) & nothing below that is often a good indicator that a restaurant or hotel might be worth considering?  Of course, we spend more time on the accommodation choices when we’re staying a week – we were happy enough with the “B&B” we stayed at in Sans Sebastian although it really was more like an expensive “Pension” (breakfast was a pricey extra) so we wouldn’t recommend it highly.  There might be better options around?  Accommodation is now very expensive in Sans Sebastian as it’s become such a popular destination with both young and older.  I’ve heard from a Spanish/Australian friend that many of the Pensions in Spain are lovely plus more affordable – we haven’t personally tried them but we would be interested to learn about others’ experiences?