It’s been such a busy week both at the South Coast (last week) and back in Canberra.  I’m sure most travellers relate to the hectic run around getting life organised before an extended time overseas, especially when working full-time – we don’t have that excuse now!  This time it will only be about 5 weeks but I return to spinal surgery in late July & again in August so that’s kept me on the hop…trouble is that I can’t hop as fast as I use to!  Another MRI tomorrow and after that we’ll finalise packing and be heading off to Sydney airport.  I won’t be taking my iPad with past photos so here’s one last post from France + later today, some food related inspirations & recipes at the end of my post.  I’ll try to find time to blog about Africa when we have longer stays in Cape Town and Mauritius.

These photos were mostly from Montmartre Paris.  We would really like to return – maybe in 2018.

Artichokes everywhere!  We often see them at our local markets in Canberra but we’ve only cooked with them once or twice…reminds me to look for a recipe from the French Cookbook I’ll be returning to the local library tomorrow!

Cheeses in France are to be seen to be believed + eaten!...unless you’re vegan!  So glad we’re not but each to their own!  In Australia, our cheese industry is developing so well particularly in the cooler southern states of course.  Even our Sunday Bus Depot Markets in Kingston (near Lake BG) has beautiful cheeses for sale from a local cheese maker.   However, the range isn’t as vast as what can be found in France. 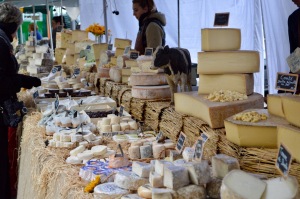 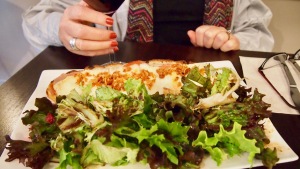 At a gorgeous little wine/cheese “bar” in Lyon – see a much earlier post if interested + other photos of our stay in Lyon.  They also served traditional cheese boards without the salad but I was trying to reduce the high fat intake as, since hitting 50+ish, I only need to look at cheese to put on weight!…unlike Tony who can eat/drink whatever he likes and he rarely gains weight.  He teases me when we hop on the scales when we return from 2 months away – I never lose weight but he does even though we do similar amount of exercise too.  Just not fair I say!

Photo below:
Chicken is popular in France!  One of Tony’s photos…I’ve never seen so many chickens on rotisseries and we saw these in various markets;  hope it doesn’t make any vegetarians feel too ghastly!  To increase our veg intake we do try to have a meat free day, 2 or 3 most weeks but we do enjoy a quality, fresh chicken sometimes – usually cooking it ourselves on the Weber BBQ.  I like the way Jamie O and other popular chefs promote higher welfare meat.  As children in the 60s we remember chicken being very expensive and usually served only a few times a year including Christmas.  In Australia it’s now one of the more affordable meats.

Brasserie in Montmartre, Paris…more about difference between Brasserie, Bistro and Bouchon later today.

The photo of me in the Bistro above was taken after a freezing cold day at the WWI Battlefields/Memorials/Museum at Villers–Bretonneux – a highly recommended day trip from Paris – see earlier blog post if interested.  Amazing thing was that the day before (Anzac Day 25/4/13) was a heat wave in Paris and Villers-Bretonneux.  I hadn’t packed clothes for very cold weather so at the end of a long, cold day,  finding this cosy little bistro/pizza place was delightful plus they served good food as can be seen below.

“In her book French Provincial Cooking, Elizabeth David says a Nicoise salad’s ingredients may vary with the seasons, but egg, anchovies, tomatoes, black olives and dressing with a hint of garlic are a must.  Henri Heyraud wrote in La Cuisine a Nice that the true Nicoise should contain quartered artichoke hearts, raw peppers and tomatoes, black olives and anchovy fillets.  This recipe has both schools of thought covered.”

I’ll type up Method when we return from Africa – describes how best to cook artichokes…something we would  like to learn more about.