Best time to visit:  May to October (the dry season)

First of all a few animal photos that I promised teachers and students at our grandchildren’s school – apologies for delay (see last post:)

Never smile at a crocodile!…even when it is smiling at you!

Here’s a closeup photo showing how crocodiles use camouflage
Can you spot the crocodile in the photo with the man and woman in the boat?…

The man here seems very relaxed and blasé with a crocodile right behind him!… he may have seen many crocs as he came from North Queensland in Australia!  We didn’t meet many Australians on our travels in Africa…only 3 couples.

Photos below:  Zambezi River sunset cruise (about 2 hours) – lots of hippopotamus lazing up and down the river.  Hippos can be very dangerous and are known to be aggressive with their huge jaws and teeth they can kill a person with one bite.  So don’t go swimming with hippos or crocs! 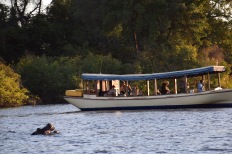 Map of Africa in relation to other Continents…good to also let children find Africa on a globe of the world.

Photos above and below:  Sunset cruise on Zambezi River, Zimbabwe

We didn’t know much about Mongoose so we looked up the net:

“The banded mongoose is a mongoose commonly found in the central and eastern parts of Africa.  It lives in savannas, open forests and grasslands and feeds primarily on beetles and millipedes.” (Wikipedia 2017) 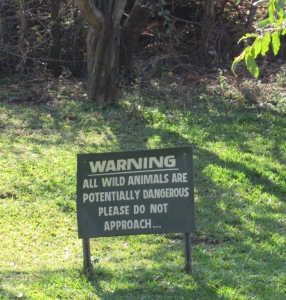 Other people noted the warning sign too and moved away from the hotel picnic table.  Where you can see the lawn finish and shrub begin is the National Park so animals can come/go.  If you go to the Trip Advisor photo site for this hotel there is an amazing photo of a herd of elephants who were feeding on trees here (including a baby elephant). While staying here, we didn’t see any elephants but we heard stories about them visiting. 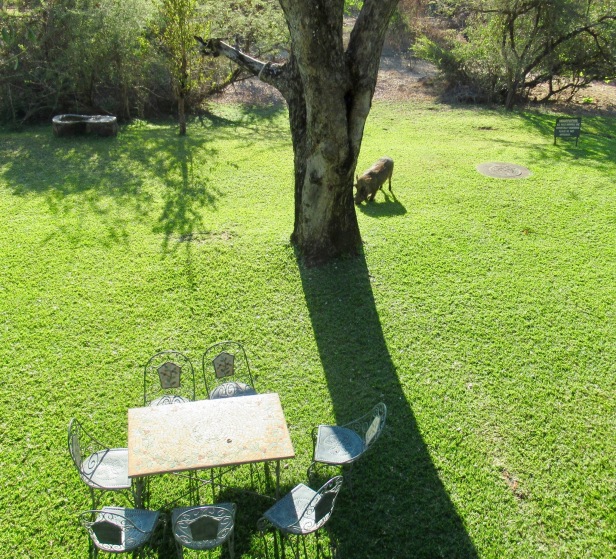 Photo of the Ilala Hotel (where we stayed) below:  The hotel architecture and design is so interesting.  The walkways between buildings not only gives wonderful views towards the National Park but also protects people from wild animals, especially in the evening when they move onto the lawns to feed on the grass.  At night we only walked along the walkways and through the buildings – we felt very safe as there were security guards positioned around the hotel as well.  Our room was in the building on the right of this photo – ground floor so we had a courtyard which was nice and sunny in the mornings. This photo was taken after breakfast.

Photo below:  where we had lunch while taking in the grand views not far from the massive Victoria Falls (see last post and the next photo below):

At different times of year the volume of water at the Victoria Falls varies quite a lot.  We were there in mid/late June and the water flow, as can be seen above, was massive.  It takes about an hour or so to walk to different vantage points around the falls;  however, in some places the heavy mist can obscure the view as can be seen below.  There are signs advising people to keep away from the edge for safety reasons but not everyone listened.  Most people remember to bring a raincoat/waterproof poncho! 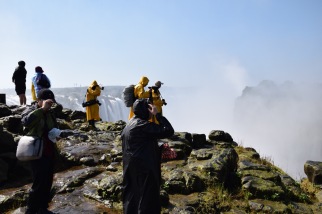 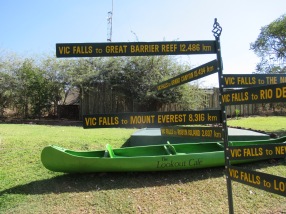 Photo below:  Batoka Gorge – near Victoria Falls…note “the Zambezi Swing” on the left hand side of our photo.  The photos under this one are from the Net.  With my bionic spine I decided to give this swing a miss😉.

Talking of my spine…I’m off to have another 2 operations in Sydney and I’ll be in hospital for 2 weeks (at least) from 26/7/17.  Once I feel well enough I’ll start blogging again in hospital I hope.  Looking/writing about photos brings back good memories and gets me thinking about where we’ll travel to next – probably just to different parts of Australia (mostly NSW) this year/early next year.  Once I get OK from my Dr we might return to NZ, South Pacific Islands or Sth East Asia – not too far on a plane.  Good thing is that we can now get to NZ and Singapore direct from Canberra😊

Zimbabwe has had many problems over the past couple of decades which has left their economy in crisis.  For example, visitors can no longer legally spend Zimbabwe dollars but they can use 9 other currencies in different parts of Zimbabwe.  In Victoria Falls we needed to take American dollars with us (we bought them in Australia) which was a good idea as we noticed that there were signs above their ATMs saying that they were empty!

We heard from other tourists we met in Victoria Falls that the National Parks of Zimbabwe are wonderful.  They had many wildlife encounters including the endangered African wild dogs en masse in Hwange National Park.  Something we did not get to see at Inyati Reserve (near Kruger National Park);  however, we did see the “Big 5” + so much more (a post for another day soon)🐘🦏🐆🦌

Photo below:  An aerial photo from the Net.  A helicopter flight is available (at quite a high price of course) but we decided not to do it as, when we were visiting, there was a lot of mist obscuring views from above.  We have heard that it can be fabulous but we had spent a lot on our hotel room (see next post) – Victoria Falls is quite an expensive place to stay although there are also back packer places etc. where accommodation costs can be a lot less of course.

If you have more time to spare in 🇿🇼 Zimbabwe, another place of interest could be the ancient rock art which tells of a “Medieval African Kingdom in Great Zimbabwe;  once a religious and political capital.” (Lonely Planet – The Travel Book – A Journey Through Every Country in the World”);  Also “the wilderness of elephants”, otherwise known as Gonarezhou National Park.”

Next post – more for adults – where we stayed in Victoria Falls.