Once again I’ve put main places on our itinerary in bold for those with just a few minutes to skim?…

In a few weeks we head off for 2 months away…Canberra – Singapore (a few days) – Europe. Our first month++ will be in Stockholm (5 nights); train/boats in Norway; across to Aberdeen, Scotland (hire car/self drive) and finally Edinburgh (4 nights) and flight across to Bologna, Italy…to rest up at start, followed by day (mostly train trips) to surrounding regions.

We’ve been to some of these places eg. Edinburgh in 2005, but we’ve decided to return plus see some of the surrounding region that we missed a decade+ ago. Some old friends (from Tony’s much earlier work life), now living in London, are coming up to join us there. Meeting up with old friends and new while travelling is always a highlight.

Note how quiet it was around the Trevi Fountain even though the weather was very pleasant in May. As I write this 5/8/18, there are awful heatwaves in Europe with temperatures at 47 deg C in some places eg. Spain, France, Italy.

Back to our trips…we returned to Rome in 2013 (photo of me below) and noticed how the tourists crowds had grown considerably – particularly Chinese coach tours. We now try to avoid the peak season especially summer when it can be so crowded and awfully hot. I’d prefer cool/grey to extreme heat any day!

After Bologna we’ll be staying on the Italian Riviera including Genoa (3 nights), Rapallo (5 nights) and from there we’ll do day trips to Cinque Terre (means 5 lands) – a famous but very touristy coastal region with 5 villages nearby. I get the impression that it’s similar to Amalfi Coast/Positano? (see my past post from 2014 if interested)…1 photo below; perhaps it’s even more rugged than the Amalfi Coast? All very exciting as only 2 weeks before we leave now!

TIME FOR THOUGHTS ON FOOD…

I like Jamie Oliver’s quote on the back of his friend, Tobie Puttock’s book “Daily Italian”

“What makes food taste special…is whether the person cooking it has personality, a smile on their face and a sense of celebration and fun. Tobie has all these qualities.”

Not sure if all home cooks and even chefs in the middle of the daily grind with young families or busy restaurants will often feel that a sense of “celebration and fun” is always necessary or during hectic times, even possible to muster. Of course if they’re running an upmarket restaurant that’s their job to fake it even if they don’t feel it! However, when one can muster that “sense of celebration and fun” it often gives a nice buzz both when eating out or at home.

Our special/weekend evenings at home…

When we were both working f/t + had kids/teens at home, I found getting meals on the table a chore sometimes as our careers were so busy (but satisfying careers too in many ways) but we would try hard to have at least one special meal on the weekend. Tony would often cook the main on a Saturday or Sunday (depending on what we had on…a lot of sport with our teenage boys at times).

I would set the table with something a bit more fancy than slap it together fast mid-wk meals – which I still tried to keep tasty (mostly healthy…or healthy enough😉)…so on wkends I’d light the candles and make a simple dessert. I’m not into spending hours in kitchen making heavy/sweet stuff although don’t mind a small slice if someone cooks it for us! I did have one Italian dessert I’d make often when we invited friends over – a “Sicilian Apple Cake” (I’ll post recipe in my Sicily post down the track). Talking of Sicily here’s a few food related photos:

Italian cooking has been a big focus of our home cooking over recent weeks as it helps us to refamiliarise ourselves with a least some of the more unusual words we might encounter on menus.

Here’s one recipe we particularly enjoyed recently…we had it alongside an Italian slow-braised beef with red wine, orange zest and parsley (see Tobin Puttock’s recipe below). However, if you’re vegetarian a homemade tomato or red capsicum based sauce might be appealing?…eg. Romansco (which is actually Spanish but still works so well or another I’ll type up below.

I’ll note the cup/oz conversions here soon to make it quicker to prepare.

Final step…I left it in the pan to cut as it was a bit easier that way I thought. I just guessed the size of baking dish to use but it’s important to not use too small a dish so that it’s not too thick. Try to judge the slices so it looks similar to the picture…about a centimetre/2 cm max. 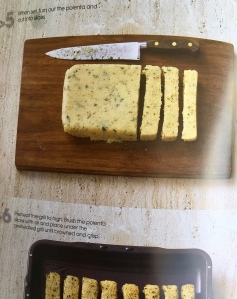 This is real comfort food, best eaten in the depths of winter. I always pair it with a big lob of polenta… (or the polenta dish above)

Dust meat cubes with flour. Choose a large saucepan so meat isn’t crowded; place over medium heat with 4 tbsp olive oil; brown meat a little then remove and set to 1 side.

Once veg is softened, return meat to the pan and cook over a high heat. After about 5 min., add wine; allow to reduce a little, then add the stock (or water) and tomatoes.

Cover pan, reduce the heat to a light simmer and cook for 2-3 hours. If pan becomes dry, add more stock or water. Pull out a little piece of beef every now and then for testing: if it falls apart when you press it lightly, it’s tender enough to serve.

Remove the pan from stove, and add parsley leaves, orange zest and a lug of extra-virgin olive oil; fold gently to combine the flavours.

Serve with Polenta eg recipe above (or below); or Mashed Potatoes alla Tobin (P156 this book) and a green salad.

Polenta is easy and versatile. Serve it hot alongside a nice winter stew, or allow it to cool, then cut it into slices and grill (see above recipe).

Put 3 cups of water into a saucepan and bring to boil. Gradually add the polenta, stirring with a wooden spoon. As the polenta thickens, stir quite vigorously to prevent lumps forming.

When all the polenta has been added, reduce heat to a light simmer; cook for about 40 min, stirring continually. Once polenta has begun to pull away from bottom of the pot, stir in the butter and the Parmesan, and season well with S&P. Serve immediately or let it cool, then cut it into slices and grill…perhaps topping with extra grated Parmesan cheese😋

Pork with a Side of Spinach (recipe below):

I love most vegetables but I seem to avoid buying spinach perhaps due to memories during childhood of it just being boiled and served plain with a little salt…never v appealing. I tried this recipe the other night with some slow cooked pork. It was actually a pre-cooked tray of pork from the supermarket (which we don’t usually buy) but time was tight that night (only took 30 min in oven) + I had the spinach in mind. Quite a quick and reasonably healthy meal…the pork was quite lean. Supermarkets now have a “star rating” here (much debate occurred whether it’s really v accurate/useful) but this pork received a 4/5 (5 being healthiest). It had quite a delicious sauce so that’s probably why it didn’t score top rating!

The next recipe from DAILY ITALIAN – TOBY PUTTOCK…an Australian chef/ex-colleague of Jamie Oliver:

Remove and discard the lower half of the spinach stalks. Rinse the spinach throughly in cold water, then drain and set aside.

In a large frying pan heat oil over a low heat. Sauté the onion, garlic and chilli until the mix is soft and translucent.

Raise the heat to medium. Add the pine nuts and cook until golden. Turn the heat to high and add the spinach. Cook v briefly, just until the leaves begin to wilt, then add the balsamic vinegar. Stir to ensure the leaves are well coated with vinegar.

Transfer the spinach to a bowl and serve warm as a side dish.