Bold print again for those who want a quick read/view 🙂

How Machu Picchu (MP) was finally found is worth a read…quite fascinating and lots about that on the Net of course.

As we all know, it’s situated on steep hills, cliffs and ridges in a lush green, dramatic setting.

Getting there in one day…started day at small town of Aguas Calientes (AC) where we were staying (2 nights…photos below).

This trip took a few hours and we were served morning tea at our seat.  It was a “Vistadome” style train with the glass ceilings but we do wonder about paying extra for these trains as we found we mostly looked out the lower windows. That’s where the views were, especially in Peru. We also experienced them in Alaska and Canada and felt similarly…preferred to do long walks instead and take in great views!

The seating on the train was a little cramped but the food and service was ok (not great).  The rail line follows the beautiful river – the only thing that spoils the natural environment is the pollution at times – mostly on river bends, where plastic water bottles accumulate.  On feedback to Peru Rail we did mention this and they promised to consult with their managers, other businesses and government to improve things for both the environment and the people – many who live in poverty near the rail line.  Might be wishful thinking on our part but better to speak up rather than not I feel. We hope things have improved when others travel there?

Detail if planning an independent trip…

This train doesn’t take you right to MP – you disembark the train at the small town of Aguas Calientes (meaning related to water…I’ll check later?). If you were up early enough in Olly and took the first train out, it is possible to then get the bus straight up to MP and perhaps return to Olly by train that night.  Instead, we had a relaxed pace with 2 nights in small town of Aguas Calientes– at El MaPi, a large hotel which we found quite good. You can see it on the right of the next photo…

As can be seen from the photos above, you can do organised day tours through the hotels but it’s easy/cheaper (just as good we think?) to do it yourself...the packed hotel lunches weren’t great (we looked at quality/price and decided on packing our own snacks)…see notes at end of post

So we had 1 night at El MaPi hotel (one of more expensive in AC…again lots of budget places eg. Hostels):

After staying 1 night at El Mapi Hotel in small town of AC (photo of hotel reception above), we were up early and on the bus to Machu Picchu by 8 am. The bus trip doesn’t take long at all and we were walking around Machu Picchu as the mist was rising (early morning), before any large tour groups arrived. It was breathtaking and so tranquil… 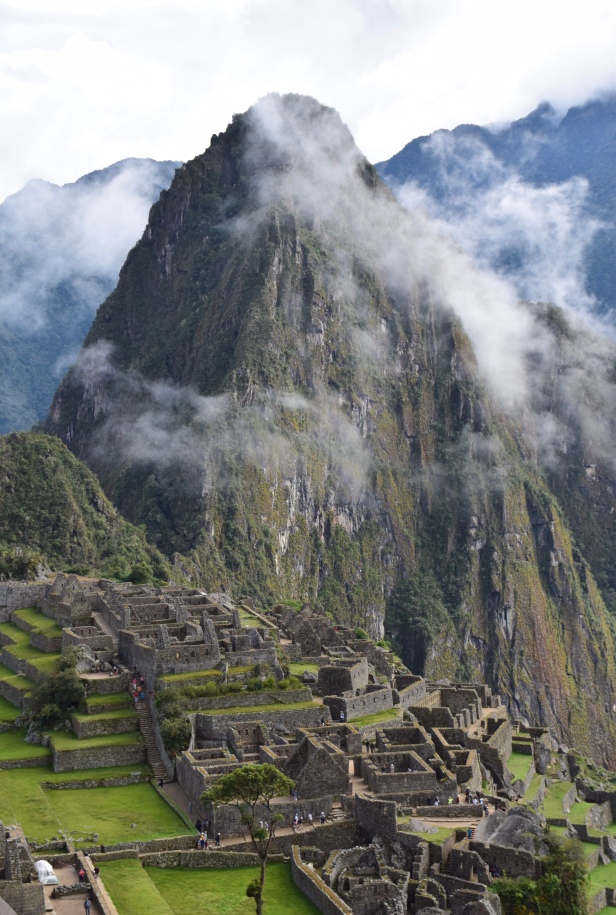 We organised a personal guide when we arrived and she was excellent – very good English and lots of interesting information for as long as we wanted really. 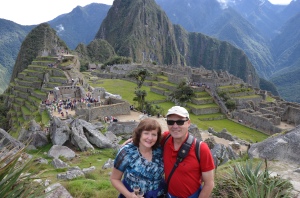 We did notice some small study groups (one from a US University), so of course they probably organised a guide who had higher levels of qualifications than what we required. 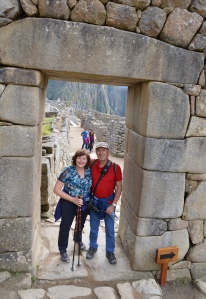 THINK ABOUT TAKING NOT ONLY YOUR OWN WATER BUT SNACKS AS WELL?

There are lots of small supermarkets in AC where you can pick up some snacks to take up to Machu Picchu…advisable because right next to the MP site there was only one large hotel (Sanctuary Lodge…photo below) which offered a “buffet lunch”. We read reviews about it…not good reports, and quite a few people said that “crowds of hungry hikers” turn up there after many days/nights of trekking…before they have showers. A few people even said they got sick because too many people were touching the food. I don’t know if that’s the case because we didn’t go there of course!

When we visited in 2015, close to the MP entrance, unless you used the Hotel facilities, there weren’t any areas where you could sit and rest (glad we didn’t go before my spinal surgery!!). We decided on the large hotel wall (photo below) as my back/legs were getting tired after a few hours of walking up/down/around Machu Picchu!…

Frustrating that there was nowhere to rest, drink or eat (you can’t eat when on the actual site of course)…even finding a shady spot to sit and have our water/fruit was so hard to find! Sanctuary Lodge really had a monopoly…annoying!

There were a couple of fast food stalls near MP entrance but things on offer were very fried up (greasy hamburgers etc) + long queues + you needed to stand to eat! Disappointing!…so instead of lingering over a light lunch after a wonderful morning we just took the bus straight back to our hotel in AC.

Not finding somewhere at MP to sit and have a light lunch didn’t matter very much (I just needed to sit and rest more than anything). A large breakfast that morning kept us feeling energised for a few hours of walking up/down/around Machu Picchu. We just had a piece of fruit, water and our own small snack (from supermarket day before), before the 30+ min bus trip back to town and another night at El MaPi hotel AC.

On reflection it would have been better to book the early morning train from AC back to Olly (to pick up our luggage from Al Albergue hotel…details in last post) and then continue on train straight through to Cuzco (or take the afternoon train at about 3 pm); or even better, arrange for hotel to transfer luggage for us (luggage can’t go up to Machu Picchu of course unless you stay at the Sanctuary Lodge…and we didn’t want to do that!). Then it would have been possible to have a long, but more leisurely train trip, from Machu Picchu (or even AC nearby) to Cuzco in 1 day ie. a 1 way trip from whatever place/hotel you choose to stay at (we enjoyed Olly more than AC).

It is possible to do a 1 day return train trip from Cuzco to MP but it’s a VERY long day…up at dawn in Cuzco and back to Cuzco by late at night. It could save money as well with no accommodation costs near or at MP but sounds even more exhausting to us. We loved having a longer stay at Olly too (details in a previous post).

As it worked out, instead of train all the way to Cuzco, we organised a driver to pick us up at Al Albergue hotel in Olly. It was a 2 hour trip with last hour driving along steep, winding roads in the dark with quite a lot of traffic going both directions. However, doing the drive was quicker than the train we noticed.

We arrived at Hotel El Mercado in Cuzco very tired (photo above)…we were pleased that they had a lovely small restaurant where we could have something light for dinner. The next morning, after a good breakfast included at hotel (everything freshly cooked including crepes) we went off to explore Cuzco. Here’s one photo…

Next post will be on CUZCO – lots to see and do there! After a few days in Cuzco we travelled onto PUNO (1 night) before a fabulous full day train trip across the country to our next longer stay at Yanque, COLCA CANYON – sometimes described as similar to the Grand Canyon in the USA.

A book I want to buy from Essential Ingredient in Kingston, Canberra:

Everywhere you go in Peru there’s corn on the menu. Here’s a recipe from a recent edition of Women’s Weekly cookbook (2019) I read at the local library – “6 week diet”…I have more like 6 days until we go to India/Sri Lanka!…

reminds me of what we enjoyed that night: this recipe alongside some cooked prawns (from near South Coast) + an avocado sliced up – another common ingredient in South America. 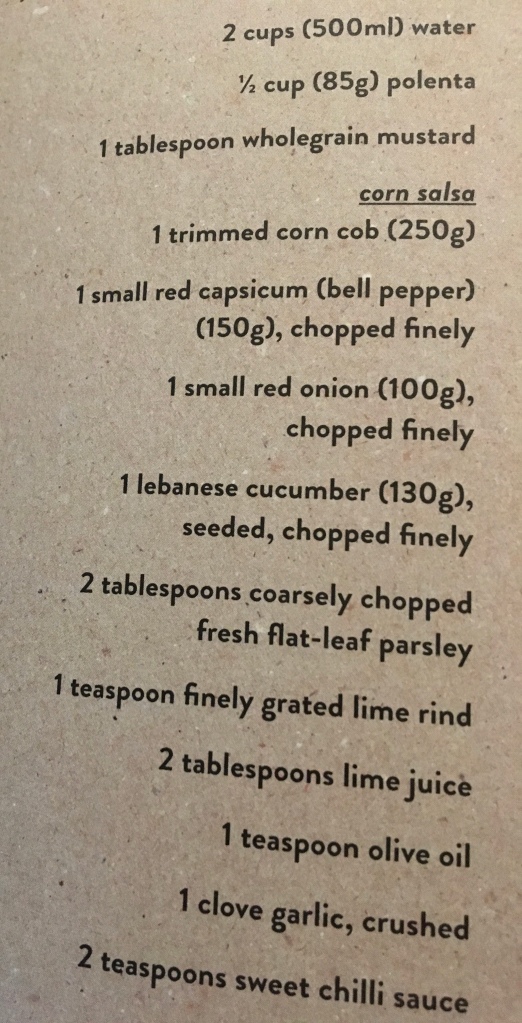