The landscapes are often beautiful on this tropical island to the south of India (see previous posts on India if interested…our travels in February).

We began our road trip around Sri Lanka in Colombo (a flight from Delhi, India 2+ weeks ago) although when we first arrived in the evening, we decided not to take the highway into the city but stay at a seaside resort in Negombo – a 15 min drive from the airport. Here’s a few views from our restful room right on the beach… 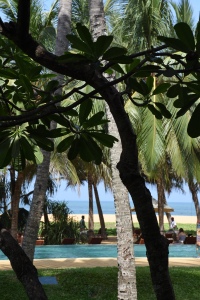 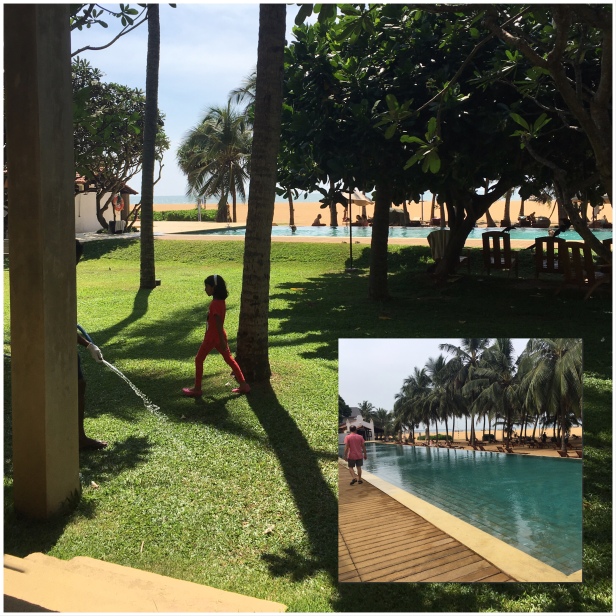 We had 2 nights at the Jetwing Hotel – more a 3/4 star place so not the luxury of where we stayed in previous few weeks in India (photos in last posts) but it was all very relaxed, warm and a perfect place to unwind before our drive around parts of Sri Lanka. (I’ll include a map in a future post). A good hotel breakfast was included, and there are a few restaurants nearby as well as two hotel beachside bars that sell both snacks and larger meals.

The pool (photo above) was lovely and so long – great for laps, but unfortunately I’m still building up my strength after 2 major surgeries (to mid and upper spine) 19 months ago so it was just gentle exercise for me on the last day when I’d recovered from minor tummy problems! However, it was wonderfully relaxing to sit on our ground floor verandah and take in the pool/sea view plus sit beside the pool for drinks in the afternoon.

If going and you love to swim laps…probably better to time your visit mid week as on the weekend locals can pay to swim at the pool and it became quite crowded on Sunday. Fortunately for us, Sunday was the day when I decided not to use the pool anyway; Monday was very quiet and there were only a few people using it so plenty of space for lap swimming.

We did like the hotel’s environmental initiatives including this… 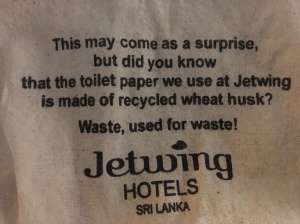 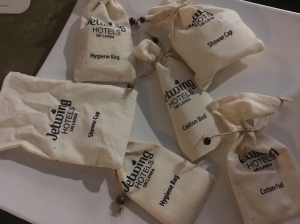 Many hotels (not all) around Sri Lanka used refillable containers etc. so we presume this might be a Sri Lankan Government policy??

After the restful start we continued onto the ancient capital of Kandy...below are a few photos from that half day drive including where we stopped for lunch. Many larger coach tours stop at this place as well (and have a buffet lunch) but as it was just 3 of us we ordered off the menu.

We usually prefer lighter lunches so Tony had a sandwich and I had a clear broth type soup as I’d had a mild case of Delhi Belly…nothing serious! However, good idea to pack the right meds, especially when travelling to places like India, as tummy upsets are common of course. I think mine was mostly related to just having a lot more spice in our food over the previous 2+ weeks. I didn’t need the meds due to having time to rest up at the Jetwing Beach hotel – I just ate very plain food for a few days – grilled fish, boiled rice and bananas!…

Our driver/guide, Anura, suggested the larger place for our lunch/mid-way stop on drive to Kandy. It also had some musicians playing Carribean…Guantanamera. We enjoyed it!

About an hour after lunch we stopped to buy some bananas…stall owners were dog lovers…a good sign I thought!

Where we stayed in Kandy – Villa Rosa Hotel

Close to the city centre on a hill top…the views were magnificent!… 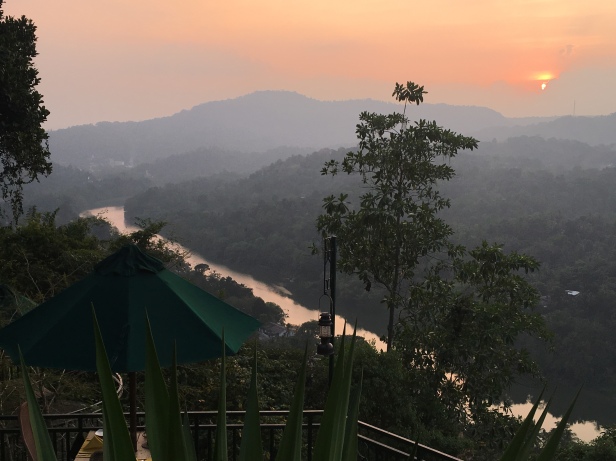 It’s a 5 min drive up the hill from the city centre of Kandy…with the last 2 min being a steep driveway and sometimes they ferry their guests up and down that driveway in a auto tuk-tuk. Their auto tuk-tuk is new and even has seat belts!

A few more photos in and around Villa Rosa Hotel… 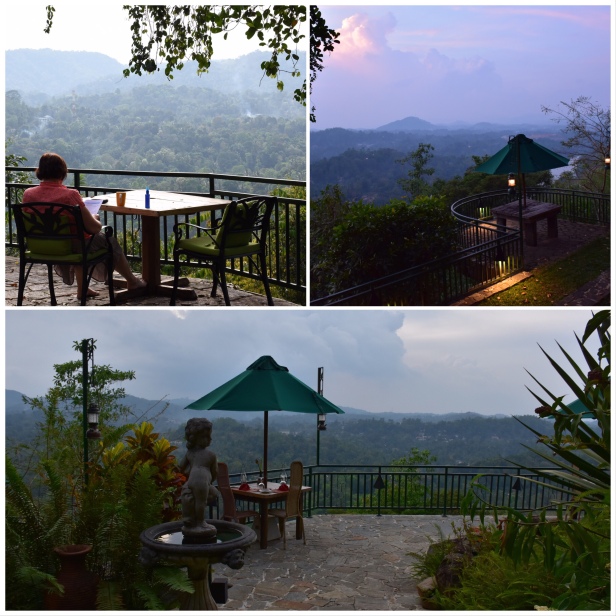 I was pleased when I heard that the chef at Villa Rosa had both Sri Lankan dishes as well as simple “Western style” food. On the first night Tony had Sri Lankan (delicious!) and I had grilled fish with plain rice…they also had a range of vegetables on offer. I had the Sri Lankan menu on our last night; Tony had the grilled fish etc. for a change.

The lovely thing at Villa Rosa is that the chef is happy to have you watch the food preparation and another young man explained the cooking process to us. A few more photos… 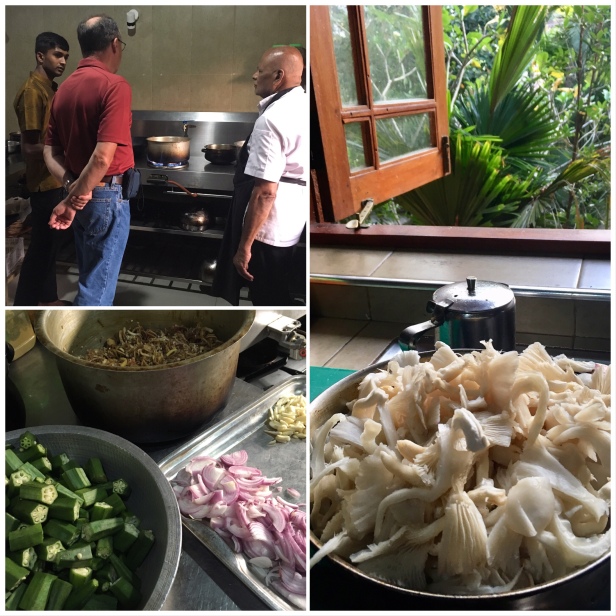 We stayed 3 nights at Villa Rosa which we found perfect but most guests seem to just stay one or two nights. Here are a few more scenes from Villa Rosa…

On our first full day in Kandy we went to see the large Buddhist temple and we were fortunate enough to be there for the “tooth relic ceremony” (photos below).

Unlike India where Hinduism is the main religion; Buddhism is the religion of the majority of Sri Lankans.

Below is a photo of Buddha so children gain a little understanding of Buddhism...this old photo from our trip to Thailand in 1982! I bought a small Buddha statue from an old Thai woman and she asked me to promise that I would place it “in a high place” in my home – which I did even though I’m not Buddhist…a promise is a promise and clearly Buddhists believe a high position is a sign of respect. 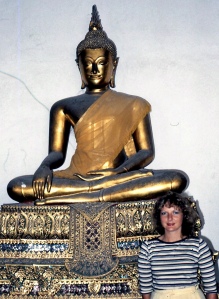 Like most religions (including Christianity, in which I was instructed during childhood) there are complex teachings and beliefs. At this temple some of those first teachings? (I might be using wrong term here…I’m no historian!) were written on palm leaves – these ancient artifacts are now so delicate of course, so they’re displayed in glass cases.

From Wikipedia about Buddhism in Sri Lanka: 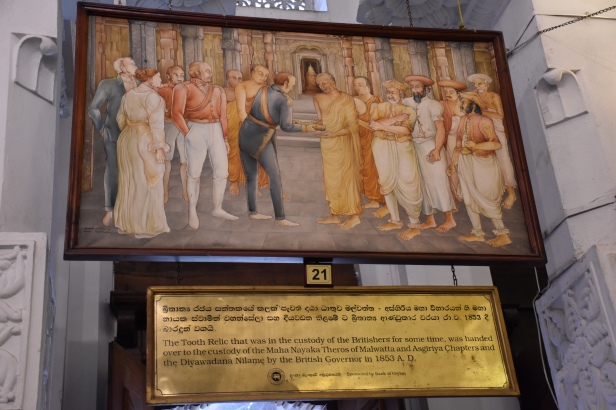 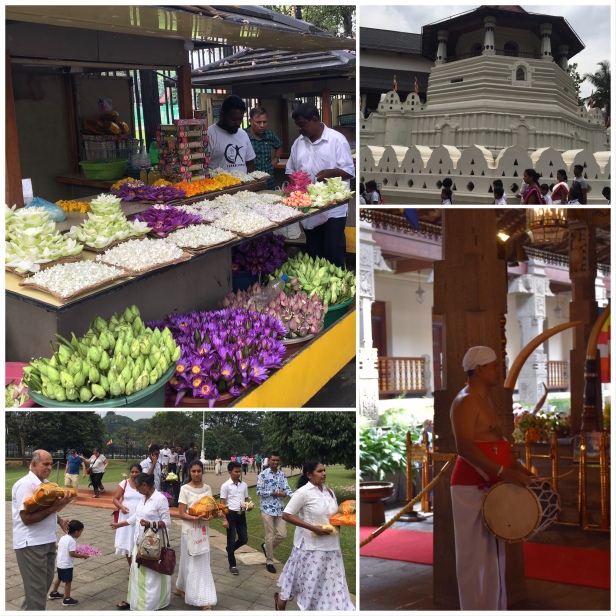 The next day we visited the beautiful National Botanic Gardens and Arboretum of Kandy…more photos and information in my post next week.

From my copy of The Essential Asian Cookbook 2004…a recipe we’ll try this weekend and I’ll then post a photo: 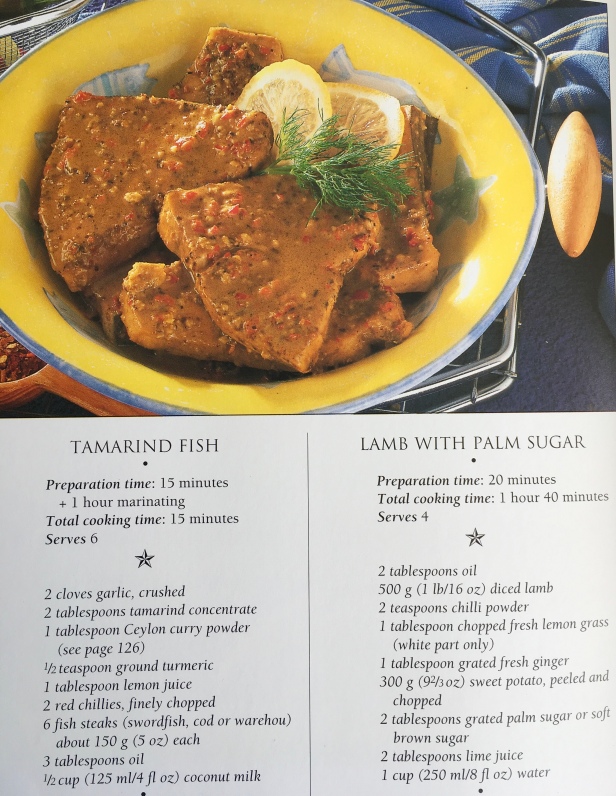 Many of the dishes have similar but slightly different spices to Indian cuisine – curries are also a main feature on most menus.

Here’s the method for Tamarind Fish:

2. Place the fish steaks in a shallow ovenproof dish. Brush the garlic mixture over both sides of the fish; cover and refrigerate for 1 hour;

3. Heat the oil in a large frying pan; add the fish and cook over medium heat for 2 minutes on each side. Stir in the coconut milk, cover and simmer for 10 min or until the fish flakes when tested with a fork.

Beautiful day in Canberra so off for a walk as morning was busy!…Red Cross breakfast at the school; helped with co-operative reading groups and returning for a board meeting tonight!…and people sometimes ask “what do you do in retirement?”!!

Simply grind everything together to a fine powder using a mortar & pestle or a spice grinder. Store in a screw top jar.

There are also some pre-prepared spice mixes like this at up-market spice stores like the one in the Canberra Centre; QVB arcade Sydney; Melbourne as well…I’ll note the name of this spice store later…we use it when we’ve had a busy day of shopping in the city. The spice mixes include a simple recipe as well.

Take a piece of tamarind pulp (or we use the thick tamarind from a jar)…the size of a tangerine (small mandarin?) and put it in a bowl with 150 ml warm water. Work paste into the water with your fingers until it has broken down and all the seeds have been released. Strain through a fine sieve into another bowl…retaining the liquid. It will last for 24 hours in the fridge. (This is a summarised version of P281 Coast to Coast)