I’ll start with a page from 2 of my favourite teaching resources – the first is about ten year old Vishnu who lives in the north/west state of Rajasthan. We only visited the capital of Rajasthan – Jaipur (more detail in past post), and we learned that it takes at least a day to drive to the Thar Desert (Vishnu’s home) near the border with Pakistan (see maps below)…a 3+ hour aeroplane flight.

(For adults…we heard that visiting the border is very interesting but not sure about safety at this point in time…worth checking the Smart Traveller site?)

Vishnu’s homeland is very different to the other Indian child featured in this book, Mehak, from the Indian capital city of New Delhi (more detail in previous post).

For kids…how do you think Mehak’s life might be different to Vishnu’s? How might her life be similar? The map/pictures below could give you some clues.

When you get to Rajasthan in the north/west, you start to see many more animals being used for transport…often they’re decorated like the elephant in this photo.

Many of the historic sites of India, for example the palaces, also have ancient Muslim mosques and towers (Minaret)… Minarets (see photo below) were/are used to call Muslims to prayer – a little similar to church bells and Catholic call to prayer in parts of Spain we noticed.

We were surprised about how similar the sound was in Spain…perhaps due to Moorish history and influence on Christianity in some parts of Spain? Below are 2 photos from the part of Spain I’m referring to…the intricate artwork with Moorish influences at the Alhambra…converted into a royal palace by the Sultan of Granada, Spain in 1333.

When we visited Tony’s brother at the Embassy in Jakarta, Indonesia, we were sometimes woken by the “call to prayer” at the mosque. India has more than 300,000 mosques and has the second largest Muslim population.

In 1981 schools groups were allowed to take the internal staircase of the QUTB-MINAR minaret (photo below) to the top. Tragically, the staircase lighting failed. “Between 300 and 430 visitors stampeded towards the exit, and 47 were killed in the crush and some were injured. Most of these were school children. Since then the tower has been closed to the public.” Wikipedia)

Talking of tragedy/personal security…for those thinking of travelling to India…security at the airports was very noticeable (and for me reassuring) – even as we stepped out of the taxi…We were stopped and had a security check before entering.

Security at big hotels is also very thorough…at the 4 Oberoi hotels we stayed at (photos in other posts), bags were scanned and other measures taken without it feeling too prison like! The other option is to stay at much smaller/lower profile places of course, which we usually do in Europe and places we’re more familiar with.

On reflection, when we were in Sri Lanka in March/early April, they didn’t have anywhere near the security that was obvious in India and the Australian Smart Traveller website’s ranking was just “exercise normal safety precautions” – since the attacks it’s now “Reconsider your need to travel”. I’ve been trying to contact our wonderful guide, Anura, to hear if he’s ok (he regularly picked up tourists from hotel lobbies in Colombo) but as yet I haven’t heard from him. A beautiful country (see previous post if interested) and so many innocent people affected; like us, I’m sure you also hope for better times for the Sri Lanka 🇱🇰 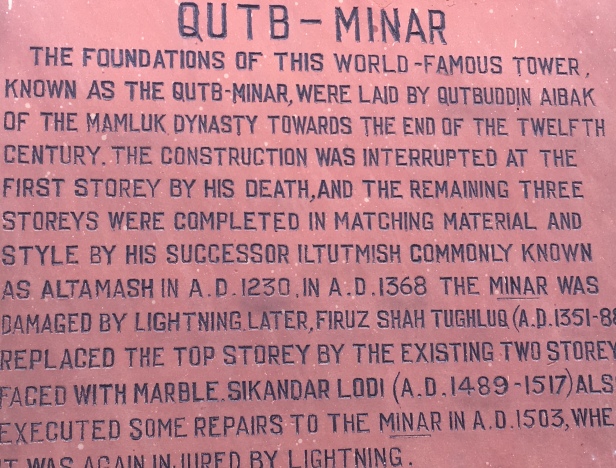 Qutb Minar and its Monuments, Delhi

“Built in the early 13th century a few kilometres south of Delhi…the red sandstone tower of Qutb Minar is 72.5 m high, tapering from 2.75 m in diameter at its peak to 14.32 m at its base, and alternating angular and rounded flutings. The surrounding archaeological area contains funerary buildings, notably the magnificent Alai-Darwaza Gate, the masterpiece of Indo-Muslim art (built in 1311), and two mosques, including the Quwwatu’l-Islam, the oldest in northern India, built of materials reused from some 20 Brahman temples.” 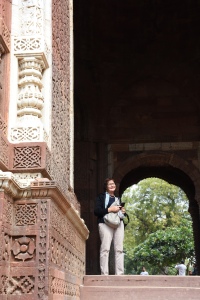 “At the foot of the tower is the Quwat ul Islam Mosque. Qutb Minar was an inspiration and prototype for many minarets and towers built after it.

The gardens are leafy and lovely at this complex too.

There are verses from the Koran (or Quran as I noticed it spelt around parts of India) carved in Arabic (or similar…I’m no historian!) – Arabic is such a beautiful flowing script don’t you think?

The ancient “Iron Pillar” – photo below…

Where we stayed in Delhi:

On our first stop in Delhi (on arrival in India) we stayed at the Oberoi, New Delhi (photos in previous post) which was very central but not too far from Old Delhi. On our last night in Delhi, after doing a loop of the cultural triangle (including Agra and Jaipur), we stayed closer to the international airport but still at an Oberoi hotel (booked through Luxury Escapes)…

The young chefs at this hotel were incredibly friendly and at breakfast, when I showed an interest in the different foods, they showed me around the different work/serving stations.We loved staying there and we also tried their fine dining Indian restaurant – beautiful! 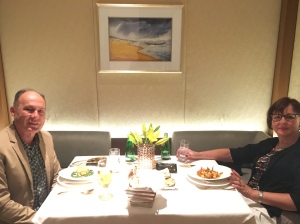 The next day we travelled onto Sri Lanka for 2+ weeks...touring around the country and finally spending our last 4 nights in Colombo. It was a shock to hear about the terrorist attacks not long after as it felt like one of the most peaceful and harmonious places we had ever visited.

The capital of India, Delhi, is in the central north region of India and vegetarian food is common on menus although in large, western style hotels you’ll find most foods on the menu including seafood…we were told that Oberoi hotels have daily deliveries of seafood. It was so fresh and we presume brought in my aeroplane.

Some Indians are vegan but many eat eggs…here’s one popular recipe from Anjum’s Quick and Easy Indian (borrowed from my local library in Canberra):

“The combination just works!” A great brunch dish; also for lunch or dinner served with some vegetables on the side…served as is, or with some griddled bread or parathas”. I find the potatoes give enough carbs for one sitting!

Serves 2…easily doubled in a larger pan for 4 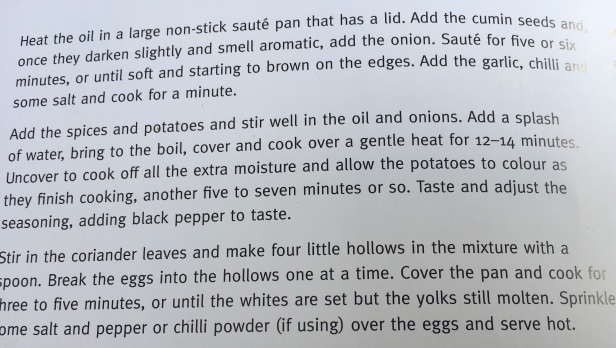 Will type up more recipes tomorrow (Sunday) + a few other recipes including crispy fish with a semolina/turmeric spiced coating; also a book list of our favourite Indian cookbooks including The Indian Family Kitchen…more like a memoir as well so I love it!

Talking of Memoirs I’m currently reading “Sideways on a Scooter – Life and Love in India” by Miranda Kennedy (2011)…another book I borrowed from my local library. I’m really enjoying it!…