To start, some helpful links for our next trip from Mollymook/Ulladulla – Melbourne although the 1st link doesn’t include Mollymook/Milton which we would recommend (perhaps instead of Bateman’s Bay?), particularly if you enjoy dining out like us!

There are many great places around Mollymook/Milton….restaurants such as Bannisters (2 hotels) eg. Friday lunches at Rick Steins as well as the more casual pool bar; a great little restaurant at Mollymook Beach called Tallwood as well as the much loved St Isidore (moving into the village of Milton soon).

St Isidore restaurant/garden (image from Net below) is for sale – the owners told us on our recent Thursday night visit (a locals’ special night)…we’re hoping that continues when they move.

Of course there are also many cafes plus a pub or two, both in Milton and Ulladulla. There’s also a range of Asian restaurants in Ulladulla – some quite good, some very average. Our granddaughters like the Japanese in Ulladulla (across from the well known Marlin Hotel) – the Japanese is fresh and tasty enough…expect casual/inexpensive not top end dining like you sometimes find in many bigger cities now.

It’s only about 40 min from Ulladulla to Mogo Zoo so easy to get there and back in one day. We had an early morning tea in Batemans Bay (after 30 min drive from Mollymook) and then continued onto Mogo Zoo. After a few hours of walking around zoo, we stopped at zoo cafe for a light lunch – photo above at outdoor tables. A zoom in shows the “Keeper Talks” timetable. We listened to the one on the lions – it was fascinating and kept the granddaughters’ interest too. 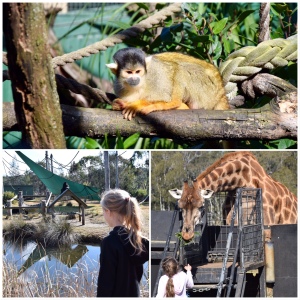 Photos below Ulladulla harbour – Ulladulla is a medium sized town with cafes, restaurants, a great library/visitor centre and a large indoor swimming pool…great for kids (and adults!) when it’s cool to swim at the beach or rock pool at Mollymook Beach (Nth…’Bogie Hole’). 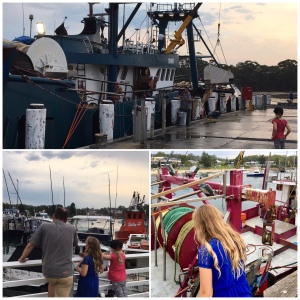 Photos above...children also enjoy looking around the fishing boats at Ulladulla harbour. I sometimes pass on stories my grandfather (a fisherman) passed onto me eg. The day a whale swam right under his fishing boat! He was also a local hero on Sydney Harbour in 1940 (a tug rescue) when he lost part of his finger…a post for another day as my niece has done some research on that event.

The Bogey Hole (photo above), Mollymook, is one of my favourite swimming places in summer, autumn, spring…occasionally in winter but I skip the swim even with a Spring wetsuit on! Between Christmas and New Year it can be too crowded with lots of children (I generally like them but not on mass!); however, other times it’s mostly nice and peaceful – but tidal of course so worth checking to ensure the water is deep enough.

Access to the Bogey Hole is either as I describe in photo caption or you can drive through the Golf Course (I’ve never been hit by a golf ball but I always keep windows up just in case!) and the road winds down to quite a large seaside carpark. You can then take the footpath down to the Bogey Hole beach (top left pic) – there’s enough beach for about 10 large umbrellas but you rarely see that many people. There are also a few trees that cast some shade…if you’re lucky enough to grab those spots in summer school holidays!

This one from Bannister’s pool bar (next to Rick Stein’s more formal restaurant) where we often go for a light, casual meal. They often have live music – we check their website as, during winter, the live music is sometimes only on over the weekend 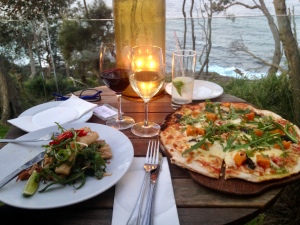 Recipes as usual as well as more on Melbourne…(I added after a hiccup with WordPress!)…

Matt Moran has a recipe in the book we own/love “P88…but we’ve also made a taste.com.au recipe as a similar entree or main as described below. Here’s a photo of main we had tonight… 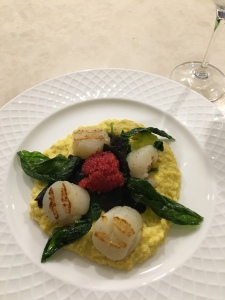 When we serve this dish as a main, we sometimes have a simple sashimi plate as a starter and have a side of rocket with the scallops if served as a main. We sometimes omit the basil leaves and increase the spinach leaves.

CREAMY BURRATA CHEESE WITH A RELISH OR COMPOTE

Bannisters served their burrata with a fig based relish and slices of toasted sourdough bread. However, I found this recipe below in a great little book from Kingston Library in Canberra. I plan on trying burrata with a homemade beetroot relish from this book – Page 63. There’s a gorgeous/non nonsense narration + cooks’ notes as well in this book which interested me as the author has Polish ancestry…I’ll do a post on Poland another day! The author Sara Zin…simply calls it “Beet and Cheese Salad”…of course Bannisters’ description sounded chefy and deliciously flamboyant!…left me wondering if our grandkids have ever heard of that word! Must ask them:) 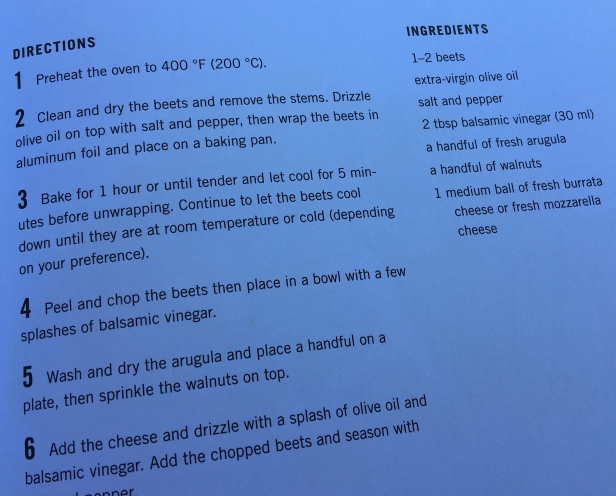 Another favourite cookbook that we own… 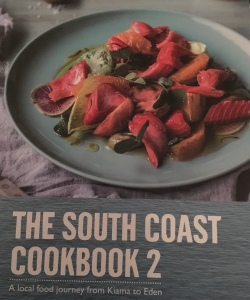 The ingredients are: 400 g white fish fillets such as John Dory, snapper or sand whiting; 250 g medium sized squid (cleaned), 12 large prawns (peeled), 1 tablespoon lime juice; 200 g Balinese spice paste (we use 1 from an Asian store but it’s not too hard to make your own); 4 kaffir lime leaves; 2 lemongrass stalks; 120 ml Asian chicken stock (or we use our own); 250 ml coconut milk; salt and pepper

We’ll be visiting Rick Stein’s restaurant for lunch on 23rd August for our 44th wedding anniversary!

Our wedding was on a cold winter night – 23/8/75…reception was at Tony’s parents’ home in Roe Street, Griffith in Canberra. We wanted to wait until Spring but Tony’s parents (Joan…in green dress) & Nelson, weren’t impressed with us living together, even for a few months before the wedding! How times have changed!

Dad and Mum weren’t particularly happy with me moving from Sydney to Canberra to live but they quickly got use to it…I think Mum was particularly sad not to have that close relationship with me anymore, and she also really enjoyed Tony’s frequent visits to our Sydney place throughout 1974/early 75. It is a hard time for parents which I never really understood until our sons made the big move and left our family home…under the usual circumstances but it’s still difficult making that adjustment. Better than having them living at home until 30ish I suppose! 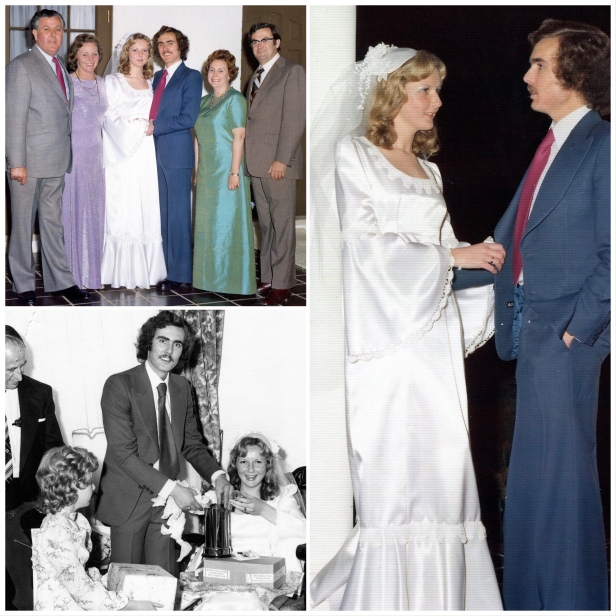 Looking more relaxed in Canberra a few years later…winter 1980…Murrumbidgee river, Pine Island near Tuggeranong, Canberra. We rented a small townhouse in Farrer (on Southside near Woden). Thought I’d miss the Sydney beaches when we moved in ’75 but having waterways on doorstep here helped a lot. Love both coast and country now. 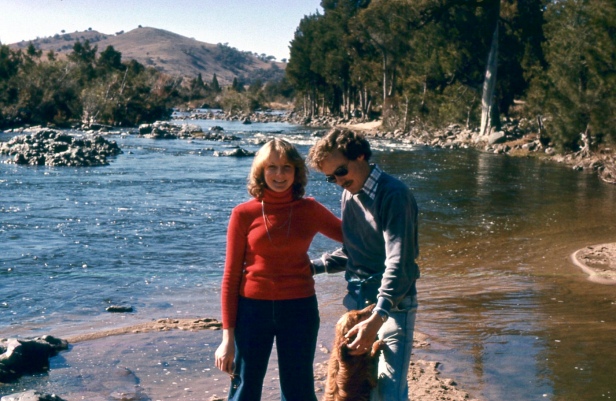 The winters can be cold in Canberra (only occasionally snows these days)…that took some getting use to after growing up in Sydney’s milder climate. Sydney’s climate is similar to the Sth Coast climate as it’s only a 2.5 hr drive to Mollymook/Ulladulla (but shorter distance as the crow flies).

It’s a similar distance from Canberra but of course Canberra is inland and closer to the Snowy Mountains – hence the colder temperatures, particularly at night. It’s also drier than the coast and even in mid winter we mostly have sunny days – quite often we have our coats etc off by about 11 am…similar to the photo above.

Of course, in summer those many days of Canberra sunshine isn’t such a good thing (there was a terrible bushfire in January 2003) and often days of “high fire danger”. Due to the clear, blue skies it’s wise to wear sun protection if visiting in any season other than winter. When younger, we didn’t and often became far too suntanned… 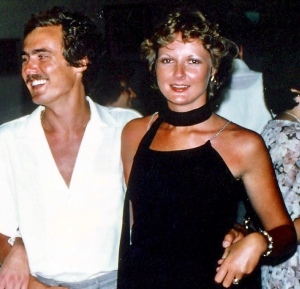 My older sister died of melanoma (skin cancer) 3 years ago at just 68 – the sun protection messages weren’t around when we were young like it is today. Consequently we get yearly skin checks now and hope for the best!

We love Melbourne too! Recently we stayed in a studio apartment at Treasury on Collins...an upgrade to a spacious apartment which was a nice surprise as we were there for a week. It was gorgeous and a great location with free tram service (within CBD) on doorstep… https://treasuryoncollins.com.au/ The colourful trams can be seen in the photo below (RHS)…there’s also a tourist/city circle tram which is also free. 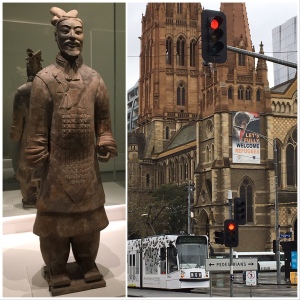 We also recommend the current Terracotta Warrior exhibition at the National Gallery of Victoria with so many ancient sculptures and other artefacts on loan from China. Of course, you don’t get a feel for the massive scale of the actual site but the exhibition is impressive and runs in parallel with a contemporary Chinese artist (name I’ll note later) whose work we also found fascinating.

When we visited China not so long ago we only stayed in Beijing and Shanghai and didn’t get out to see “the warriors” like many people do when they travel around China. Our visit was more an extended stop over on the way to Europe…see previous posts if interested – some of which also shows a little of our trip into China from Hong Kong in the 1980s. 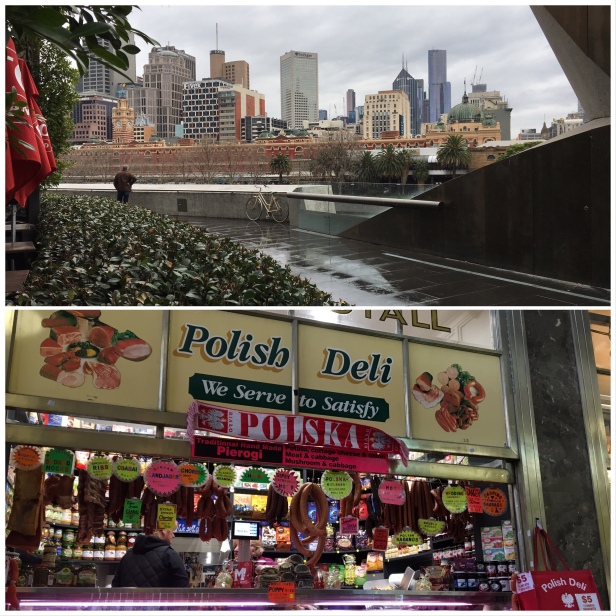 While in Melbourne, an old school friend of mine visited at the studio apartment so we bought a spread of delicious deli food from a few different places…cheeses, various pickled veg, fresh bread, smoked fish, always an avocado!…etc. We started with our free drinks on the Treasury on Collins Mezzanine level (another inclusion in our upgrade)…we thought we would need to pay for my friend’s extra drink but the staff said it was included too…generous we thought!

Also highly recommended near the CBD is the Immigration Museum (photo below)...

don’t miss the interactive experience where visitors take the role of an immigration officer. Various “applicants” are interviewed (based on real cases from various decades), and you need to decide whether they pass or fail 3 different criteria.

I interviewed 3 different people/couples, including a couple from South Africa, and I passed them all! I would never get a job with our current Immigration Department!… and the Minister would not be impressed with my decision to let everyone enter!

Interestingly, the white South African couple were not successful…their case was from the 1990s.

I could have spent hours reading the case notes of various interesting people and finding out what happened for them. 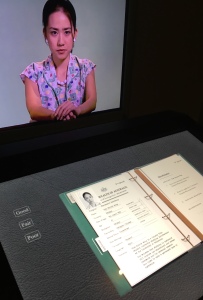 More on Melbourne visit another day!