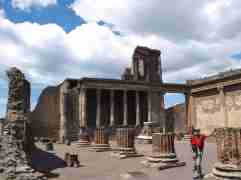 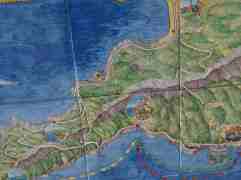 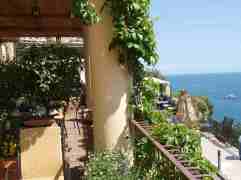 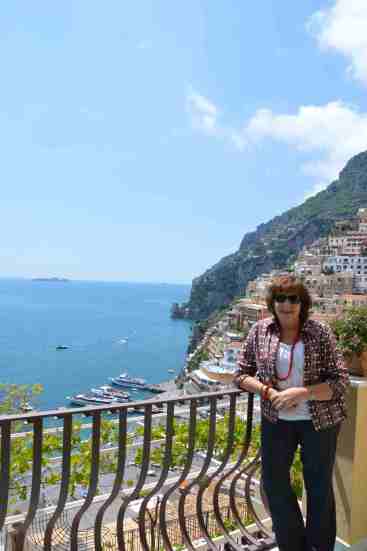 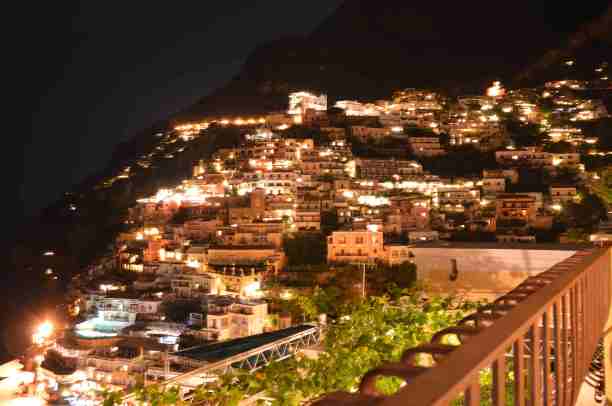 Sometimes a gem of a hotel or B&B can be the highlight of a destination…one of the advantages of deciding on your own accommodation (we often use Trip Advisor & other review sites).  That was the case when we stayed in Sorrento (accessed by train from Rome) for 4 nights.  It was an easy walk to and from the train station – it was around 10 minutes and we easily did so with our luggage.  Of course there are taxis if it’s raining.  A lovely breakfast was included in our rate & if weather is good you can sit in the beautiful courtyard (see photo).

We caught the train to Pompeii – no need to arrange an expensive tour as it was very easy to do as a day trip and there are self guided audio tours available and also private guides if you so wish.  It’s a short trip and the train stops right outside the entrance to Pompeii.  It was a fabulous day and we returned to Sorrento in time for dinner – there are a range of cafes and restaurants ranging from casual eateries to fine dining.  We went for something very light as it was one of those wonderfully tiring days…we were still talking about it late into the evening!  A fabulous time!

Some photos below, with views of the active volcano Mt Vesuvius, Italy (in the distance) – it erupted and killed many people in the nearby city of Pomeii almost 2000 years ago (AD 79). The photo of the dead body is a bit ghastly but it shows a person who was killed by the volcano – the body was dug out of the ruins by Archeologists (check out what they do on Net) and the body shape was encased by the lava when it cooled from super hot to cold. The person probably died before the lava flowed through the city – many died from breathing in the ash filled air; that happens when a smoke/ash cloud is sprayed out during the first stages of a volcanic eruption.

Wikipedia describes a powerful eruption as:

A massive eruption will spray “a huge cloud of stones, ashes and volcanic gases right up into the air and the surrounding area (33 kilometres), then the volcano spews molten rock”…. that molten rock and lava flowed down to the city of Pompeii and “more than 1000 people died…but the exact numbers are unknown. The only surviving eye witness account of the event can be found in two letters written at the time.”

Very brave and caring people to be writing to their loved ones when so frightened!

“Today it is regarded as one of the most dangerous volcanoes in the world”…it can erupt in a “violent and explosive way”. 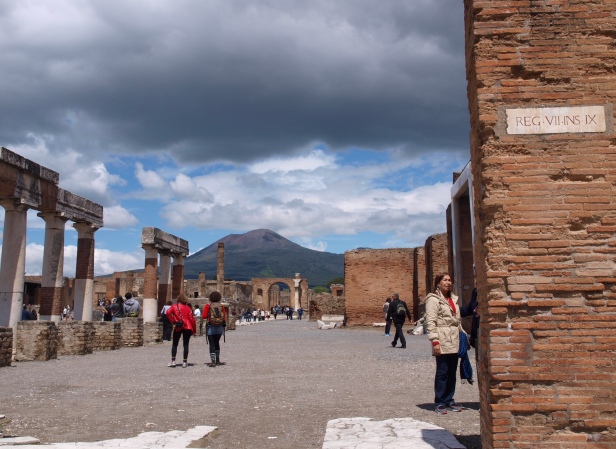 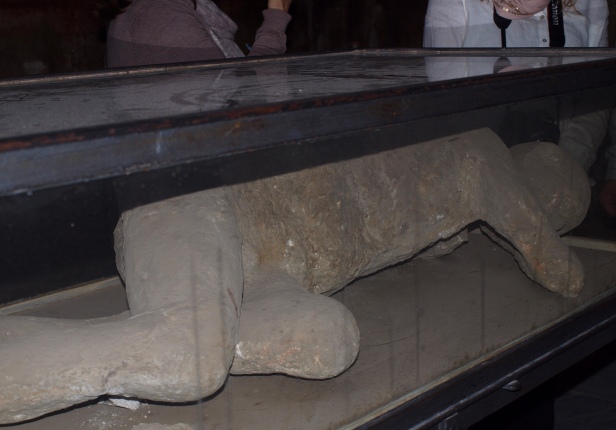 People still live in the city and countryside near Mt. Vesuvius…the rich soil (naturally fertilised with volcanic ash, etc.) is a great environment to use for farm land, orchards and vineyards (grape growing). The difference today is that Volcanologists (experts in 🌋) can now predict when a volcano is likely to erupt and then warn people to evacuate.

It’s impossible to predict the date of an eruption. Volcano warning systems are based on a probability (likelihood of something happening).

Think I’m glad we live in Australia where there are no volcanoes and very few big earthquakes😉…occasionally we do have major bushfire and huge floods so we all should be aware of warning systems in the places where we live and visit particularly if there in a more dangerous season eg. summer in Canberra; cyclone season in North Queensland; floods in Sth Queensland/Nth NSW.

From Sorrento we had a driver pick us up from our hotel and it was a short morning trip to Positano.  Of course you can hire a car and drive yourself (something we’ve often done in Italy) but it’s a winding, scenic road and we wanted the luxury of both of us taking in the beautiful views.  Our driver was excellent – stopped a couple of times at lookouts along the way and the cost wasn’t high compared to similar services in Australia. We arrived in Positano for lunch.  Over the next few days we took ferry trips up & down the stunning Amalfi Coast.  Highly recommended! 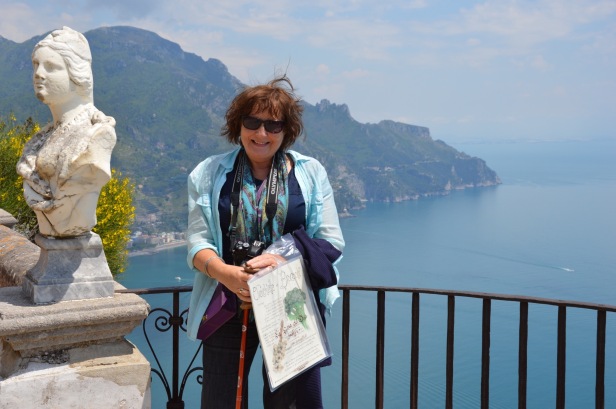 Photo was taken at a famous garden near town of Amalfi – Villa Cimbrone Gardens in Ravello.  There weren’t many flowers when we were there even though it was Spring;  however, as can be seen from the photo, great views.  Our lunch in the Old Town of Ravello was a highlight.  To get there we took the ferry from Positano (where were staying for 5 nights) to Town of Amalfi (looked around Amalfi…pretty but we preferred Positano) and then a short bus trip to Ravello.  It was a very enjoyable day out – we were back in Positano by late afternoon.