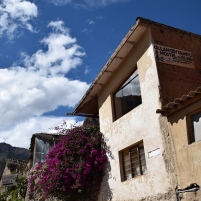 I’ve done a few previous posts on Peru if you’re interested…some with a food/cooking focus. I’ve updated this one (6/2) with a few extra photos etc.

These details in next paragraph only of interest if you’re about to plan a trip there😉:

We stayed in small town of Olly for 4 nights; AC 2 nights (more about AC in next post)…AC is the small town at the base of Machu Picchu and from there it’s quite a short bus trip up to MP. (AC is quite a touristy place…we preferred Olly). We left for MP quite early in the morning and returned to AC by about mid afternoon after a few hours of walking up/down and around MP. We were then able to take a train back to Olly; pick up our luggage and have a driver return us to Cuzco. A very big day and might have been better to stay one more night in Olly and get the train back to Cuzco??If the budget allows that would make it less tiring. I fell into bed by the time we got to the hotel in Cuzco…I was so happy to see that lovely room/comfy bed (a post I’ll do tomorrow).

ALL ABOUT OLLY where we stayed 4 nights:

On your route to MP, Olly is a fabulous place at which to stay for a few nights – so much history and during the day, the small town is almost deserted because many of those travellers are doing long treks. We have friends who have trekked into Machu Pichu – of course there are many options with overnight camping (or similar) along the way.

Our trip was not long after my 2nd major spinal surgery so I wanted a comfortable bed at night and a hot shower.

We stayed at Hotel Albergue (4 nights)…some rooms are part of the original historic building (was the old railway station) close to what is now their relaxed yet elegant restaurant and cafe. The first room we stayed in wasn’t so good – very small (for what we booked…we checked records & showed them) + the shower had problems…issues with old plumbing perhaps? We insisted on being moved asap to a better room – which they did and it was part of a small/separate building right next to the historic building. Here are a few photos…

The centre of the small town of Olly has lots of backpacker hostels – some that look very comfortable with casual dining on the doorstep…others that further develop the skills of the local people eg. A great cafe/restaurant “Hearts Cafe” (photo below) where we had lunch on 2 occasions. Delicious food + warm/friendly service. There’s also a large Indigenous population in Olly who are very proud of their culture…it’s not just something contrived for the tourists, as you sometimes see in other parts of the world (including Australia). On our 2nd day, around mid morning (when younger/fitter folk had departed on their long treks!), we stumbled across this parade/local festival as accidental tourists (photos below). As can be seen from the photos we were the only tourists watching these joyful festivities – it was wonderful!…

It was the Choquekillca festival and began at the local church… 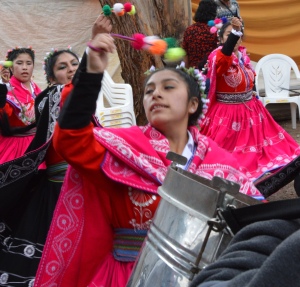 ARCHEOLOGICAL PARK, OLLYANTAYTAMBO
Frequently overshadowed by the world-famous Machu Picchu ruins, nearby Archaeological Park Ollantaytambo (close to the centre of town) gives wonderful views and insights into the culture, farming and construction practices of the Incas.
The bonus is that if you go mid morning (maybe after a coffee at 1 of many cafes?), there are hardly any other tourists (as can be seen from photos)…most have left for hiking trips to MP and surrounds. There are occasional benefits related to my annoying spinal/mobility/rehab problems!
For busy history nerds like me…skip over if you don’t have time for detail atm!
I always find it helpful to at least read up on some basic history before we go to an historic site. From my teaching, I’ve found that Timelines are very helpful. So many of them on the Net including ancient.eu…”Inca Civilization Timeline”. Here’s a little from that:
C. 1100 CE : The Inca, led by Marco Capac, migrate to the Cuzco Valley and establish their capital at Cuzco.
C. 1425 CE – 1532 CE
The Inca Empire flourishes in South America.
C 1450 CE
Foundation of Machu Picchu in the High Andes.
C1470 CE
The Incas conquer the Chimu civilization based at Chan Chan.
1493 CE – 1526 CE
Huayna Capac reigns as Inca leader and constructs fortresses, religious temples and roads throughout the empire
C 1510 CE
The Inca abandon the settlement of Machu Picchu.
1526 CE – 1532 CE
Civil war between Inca leaders.
1530 CE
The Inca empire reaches its greatest extent.
1532 CE
Pizarro and the Spanish conquistadors arrive in South America.
16 Nov 1532 CE
Battle of Cajamarca – the Inca leader, Atahualpa, is captured and held for ransom by Spanish forces led by Pizarro.
26 July 1533 CE
The Inca leader, Atahualpa, is executed.
Nov 1533 CE
Spanish forces, led by Pizarro, take the Inca capital of Cuzco.
1535 CE
Pizarro founds Lima as the capital of “Spanish Peru”.

We heard from a local guide (you can pay extra for a guide when you purchase your ticket at the site) that the original Inca “city” here comprised of a large garrison, religious area/temples, a royal palace + VIP spaces (“invited to join”…by royals we gathered!); large terraced fields for farming; secure storehouses for produce; irrigation and water reticulation…

After our 4 night stay in Olly we took Peru Rail (2+ hours?) to our next 2 night stay near Machu Picchu. The name of this town is Aguas Calientes – a perfect base for day trips up to Machu Picchu by a short bus trip. I’ll do a blog post on AC shortly as I’m presenting this info to a Travellers’ Tales group (a “Canberra meetup group”) this Sunday.

MY USUAL RECIPE/FOODIE FOCUS...I’m about to purchase this book soon… 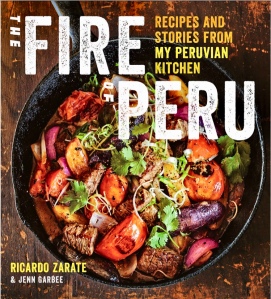 Our hotel served Pisco Sours (cocktails) at a great price for Happy Hour…we had 1 most evenings! I’ll pop a recipe in here later from Net.

Here’s a few more pictures from the restaurant we went to for dinner on a couple of occasions…El Albergue (No 1 on Trip Advisor in the small town of Olly. Most other “restaurants” were casual eateries eg. Small pizza places or next to hostels). We don’t often eat at the same hotel where we’re staying but this was a beautiful restaurant. We did enjoy The Heart Cafe for lunch on 2 occasions (photo above).

It was also possible to do “farm visits” at El Albergue – their “farm” was right next door (more like a large vegetable patch etc) + some cooking classes I think, but we looked at the price and reviews and decided not to on this occasion. Here’s a view from our table one night…

There are fields of quinoa everywhere as you travel through Peru eg. On our first drive from Cuzco airport to Olly…here’s a few photos:

It was a tiring day at the start of our Peruvian adventure as we had travelled from Lima to Cuzco via a short flight in the morning; was picked up at the airport by a driver who took us on a half day scenic route on the way to Olly.

We had a late/light lunch on the way at this “cafe” overlooking the very interesting salt fields…here’s a photo of those (more information about them later). The cafe where we had lunch can be seen on top of the hill. Lunch was very fresh and tasty: