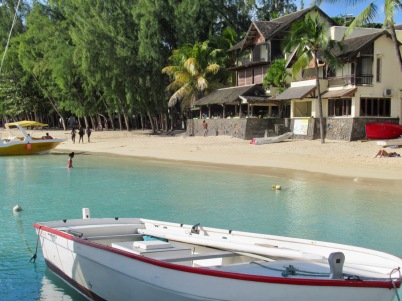 Well I haven’t been blogging for a while as there was not only a problem with IT issues (maybe a WordPress problem?see last post on Mauritius) but also recovering from my 2 big spinal surgeries in July/Aug has had it’s ups and downs with hardly enough energy to keep up with day to day tasks. Fortunately, I’m starting to feel stronger so I hope to do a lot more over coming weeks. We had so many great times during our month in Africa including a week in Mauritius 🇲🇺

After 3 weeks travelling around Africa (mostly Sth Africa), we planned on a tropical destination before we headed home to an Australian winter (winter isn’t harsh in Sydney but 3 hours Sth/W along the highway in Canberra it can be). I also wanted to do plenty of swimming & hydro therapy before I had spinal surgeries in July/Aug. My back pain was mostly bothersome in the mornings but I could feel it getting worse and my mobility decreasing so it was one of those things I was dreading & putting off by holidaying in Africa. Sounds crazy to holiday in Africa with a very bad back but when we booked almost a year before, I wasn’t having many problems, 6 months before we were due to leave it started to play up badly. Saw the specialist and he identified the problems on MRIs etc.; we were almost ready to cancel the trip (& lose a lot of money!) when the pain in the morning started to ease…all v puzzling! So we received some advice + pain meds from Dr and we decided to take our chances! Glad we did because it all worked out quite well and I didn’t even need to use too many pain meds – hate the foggy head feeling even when the pain is greatly reduced. Mauritius was a perfect place to wind down although it did take a couple of days to adjust to doing very little, rather than buzzing around to see lots of sites & sights!

We stayed at the Baystone “resort” (more like a small hotel) for a couple of days before we even ventured across to the Grand Baie Village via the resort’s large motor boat (see photo of me below). The boat trip only took about 15 min and that was going quite slow as bumping across the waves hurt my back. The skipper was very considerate and slowed down when I asked him. On another trip to the village by boat, it was just the 2 of us, so we went in a small boat which was slower because I felt the bumping across the waves even more. The next photo was taken from the wharf at Grand Baie Village…there are cafes, shops, bars, restaurants etc….a few buskers as well, like you can see in the this photo. The music was very pleasant so we stopped for some morning tea at a cafe right next to this wharf. It was a beautiful, balmy day and with the music drifting in, it felt heavenly!

One thing we really liked about Mauritius was the harmonious and safe feel – it has a multicultural vibrancy and what we generally felt was a respect for religious and cultural differences…evident from this photo with a Muslim happily walking along a beach where people in western style swimmers relax. 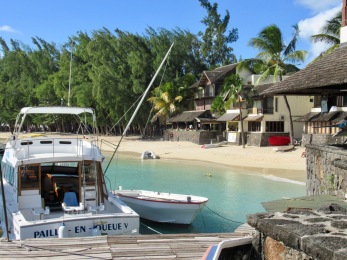 Similar to most countries, in Mauritius, the divide between the rich and poor is great although around the village of Grand Baie you don’t see much poverty like in parts of Asia and Africa where the poverty can be just one street back from the top end designer stores and similar places catering for wealthier tourists. Of course, around the mariner and wharf areas in Grand Baie, the other signs of wealth are all the luxury boats – varying in size from the small motor boat we arrived in to huge vessels that look like they might belong to royalty or the super rich.

We stayed on in Grand Baie for lunch…here is the menu from a cafe near this wharf: 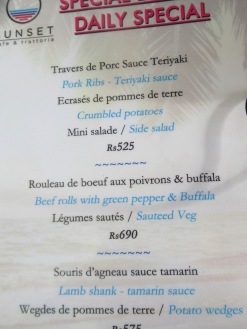 Photo above: enjoying the sunshine at the Sunset Cafe…weather in June was beautiful – not too hot and if you don’t mind feeling a bit chilly for a minute or so, quite ok for swimming as well.

After lunch we strolled along the beach (photo above) – again we saw Muslims happily sharing the beach with non Muslims…it felt like a very safe and harmonious country. 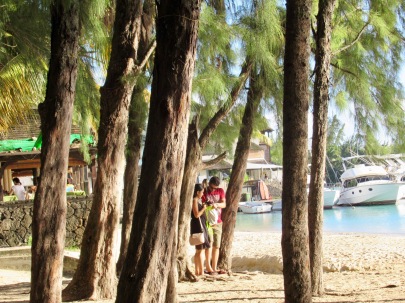 After strolling along the beach we spent some time browsing through the shops. I bought some gifts to take home for our sons & their wives…the Roxy brand was popular with our daughter-in-laws. Not prices like in some parts of Asia but reasonably priced and most importantly the clothing was well made.

Photo below: We also visited a small market selling the usual tourist “stuff”…some of it looked cheap and poor quality but we did find some beach towels we were happy with – made in Mauritius.

After quite a few hours at the Grand Baie village we headed back to the Baystone hotel (photo below). This is the view from our room in the afternoon.

Photo above: the food at Baystone was beautiful. This is an example of the beautiful fruit plate at breakfast – some days they varied the fruits.

A Note on Mauritian Food:

In many of the top end restaurants there is a huge French influence of course with many Mauritians having French ancestry. There is also the influence of other European groups as well as the Indians and Chinese…more on Mauritian food tonight as well as a recipe or two to conclude this post.

Until then, one last photo of the book we purchased there: